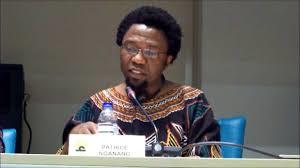 Patrice Nganang is a Cameroonian-American writer, poet, and professor who recently visited Cameroon.

His visit came shortly after publishing a widely read article on the website Jeune Afrique, a critical paper of the Biya government’s approach to ongoing instability in Anglophone regions of Cameroon.

Prof. Patrice wrote; “It will probably require another political regime to make the state understand that the machine gun cannot stem a moving crowd. Only change at the top of the state can resolve the Anglophone conflict in Cameroon.”

He was declared missing on December 7 at the Douala airport on his way to Zimbabwe. HIs wife raised alarm and told the media that he had not reached the destination. A source told AFP that he was taken to Yaoundé because of his article and related social media posts.

Nganang had recently spoken to ARREYB News Reports when he got into the country, saying he came to put a few things in order and return to his base. Though a Cameroonian, he had obtained an American nationality where he currently serves as a professor at Stony Brook University, New York State, lecturing Cultural Studies and Comparative Literature.

“The abduction and detention of Patrice Nganang, a Cameroonian-American writer, poet, and professor, demonstrates the high cost of free expression and press freedom in Cameroon” PEN America declared.(PEN America is an institution for the intersection of literature and human rights to protect open expression in the United States and worldwide)

“We condemn Nganang’s detention and call on the Cameroonian authorities to release him unharmed immediately. Detaining an important independent voice like Patrice Nganang, who has used his writing to investigate the consequences of violence, is indicative of a movement by the government to silence all political criticism and dismantle the right to free expression,” said Karin Deutsch Karlekar, PEN America Director of Free Expression at Risk Programs

Patrice may be subdued to police questioning and possible imprisonment if found guilty of any crime levied against him.