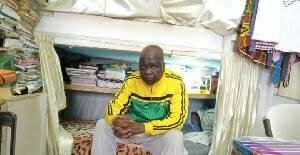 Vamoulké, 71, who has been detained for 4 years announced recent Covid-19 cases identified in his cell

That his health is at big risk after two co-inmates contracted the virus: one of them, he said, was diagnosed with a pian in the chest, another tested positive, while a third inmate was already seeing symptoms. His letter expressed fear for his life after underlying health issues

But the minister is yet to respond. Since his incarceration, Vamoulké has been detained without trial. He is accused of embezzlement of state funds during his service at CRTV

He adds to the list of journalists incarcerated by the Cameroonian government.

In a statement on Wednesday, Reporters Without Borders (RSF) urged the Cameroonian authorities to release the journalist. The organisation said it will ‘hold the government responsible for Vamoulké’s fate’ given his health condition

Apart from the novel coronavirus hitting cells, these prisons are always at risk from the prevalence of deadly diseases like tuberculosis, HIV, AIDS, Cholera & scabies.

The most famous of these prisons are the Buea Central prison & the Kondengui Prison in Yaoundé. Built for 1,500 persons, the Kondengui Prison was created in 1967 with a facility of 16 toilets and 400 beds but now harbours more than twice the initial number–using thesame prison facilities.