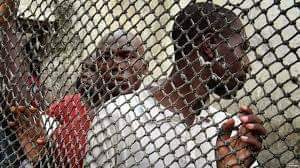 Nigeria’s president Muhammadu Buhari has pardoned 2,600 prisoners to reduce overcrowding in the West African country’s jails and slow the spread of the novel coronavirus.

The president granted a pardon to 2,600 inmates of correctional centres nationwide, the Minister of Interior, Rauf Aregbeshola, has said.

Mr Aregbesola made this known while addressing a news conference on Thursday in Abuja, saying 70 of the inmates would be released from Kuje maximum custodial centre

“After the release of the first phase, the committee will continue to meet regularly to consider those who deserve the benefit,” he said.

Back in Cameroon, citizens are also wondering if such a decision would come from its president with thousands presently detained in deplorable conditions across the country’s dungeon prisons.

Within the last four years in Cameroon, more than 3,000 people have been arrested & thrown to prison including journalists, politicians, activists, protesters & civilians caught from the streets and charged for disturbing public order.

Some spent days and were released after a financial deposit of at least 50,000FCFA ( about $100) while others serve months and years in prison waiting for trail.

The sad thing about these prisons are the poor living conditions. Inmates are crushed inside disease – ridden cells with no beds, little or no food and less hope, sometimes tortured.

From 23,000 prisoners in 2013, a report by NCHR published in 2018 showed that Cameroon had 31,000 prison inmates. Rights groups also say that these prisons suffer from the prevalence of tuberculosis, HIV, AIDS, Cholera & scabies.

In 2019, the prisoners of both prisons mentioned above protested and several gunshots were fired. A day later, some inmates were taken from these prisons and no word has been heard about them.

And in 2015, it was alerged that one of these prisoners suffocated to death after he was locked up in a 4 metres squared cell with 22 others.

With the out outbreak of covid-19, citizens are expecting the president to declare a pardon.

But the president as stayed mute