President Donald Trump announced yesterday his intention to terminate the eligibility of Cameroon for trade preference benefits under the African Growth and Opportunity Act (AGOA).

Trump admits it is due to persistent gross violations of internationally recognized human rights.

The President notified Congress and the Government of Cameroon accordingly.

Based on the results of the required annual AGOA eligibility review, the President determined that Cameroon engages in gross violations of internationally recognized human rights.

“I am providing notice of my intent to terminate the designation of the Republic of Cameroon as a beneficiary sub Saharan African country under the African growth and opportunity Act (AGOA).

I have taken the step because I have determined that the government of Cameroon currently engages in gross violations of Internationally recognised human rights, contravening eligibility requirements of section 104 of the AGOA

Despite intensive engagement between the United States and the government of Cameroon, Cameroon has failed to address concerns regarding persistent human rights violations being committed by Cameroonian security forces”

Consequently, Cameroon is out of compliance with eligibility requirements of AGOA.

These violations include extra judicial killings, arbitrary and unlawful detention and torture.

Accordingly, Trump has terminated the designation of Cameroon as a sub Sahara African country under the AGOA as of January 1, 2020.

U.S. Trade Representative C.J. Mahoney also said “This action underscores the commitment to upholding the human rights criteria as required in the AGOA legislation. We urge the government of Cameroon to work with the United States and the international community to strengthen protection of human rights under the law and to publicly hold to account those who engage in human rights violations.”

The United States will continue to monitor whether Cameroon continues to engage in gross violations of internationally recognized human rights in accordance with the AGOA eligibility requirements. 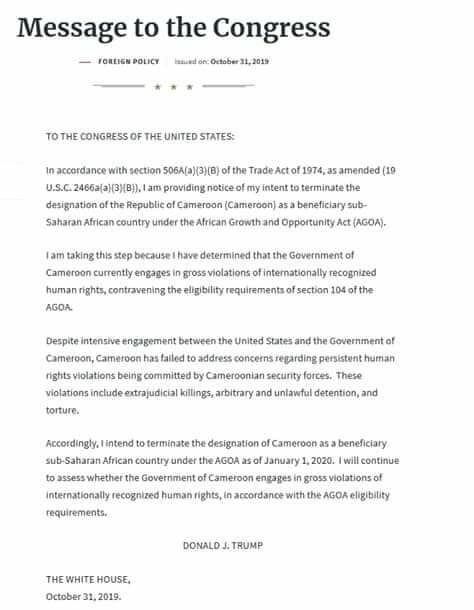 In order to qualify for AGOA trade benefits, partner countries must meet certain statutory eligibility requirements, including not engaging in gross violations of internationally recognized human rights. Other criteria include making continual progress toward establishing the rule of law, political pluralism, establishing internationally recognized worker rights, and the elimination of barriers to U.S. trade and investment..

A blood bath caused by reckless government reaction to a peaceful strike started by Lawyers and teachers demanding reforms in 2016, the Cameroon Anglophone crisis has claimed more than two thousand lives, over two hundred villages burnt and more than half a million people displaced – a bloody fight with military and separatist nuts behind the bolt and a giant spiel in the name of dialogue which failed to solve the fray.

These above figures have even been disputed. While federalist movements claimed that the conflict had taken 3,000 to 5,000 lives as of 2019, separatists claimed that between 5,000 and 10,000 people had been killed.

Launder Your Stress Away With INSTANT PRESSING. One Call Does The Magic Cleaning

Economy: CryptoCurrency Gets To Cameroon. Try The Easy And Soft “Crypto-Life” With Nelium Wallet

CEMAC Director, Martin Che Affirms Commitment To Over 148,000 UBA Clients. “Our Clients Are Partners;Partners Are Dear To Us”