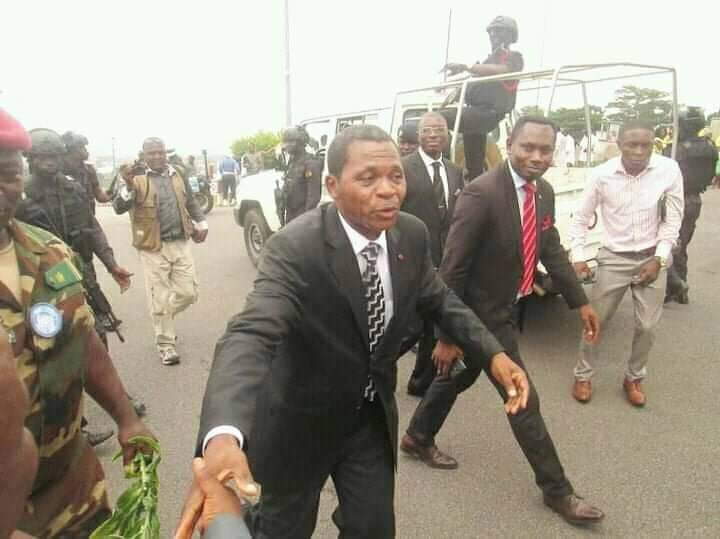 Cameroon’s minister of territoal administration, Paul Atanga Nji has over the years had his share of criticism from the Cameroonian public for his slip of the tongue moments in interviews and public outings.

On each of these ravaging moments, social media has gone wild with the creation of memes, videos, posts, and slangs that have gone viral on the Internet

‘Burrying the bereaved’ seemed to be the earliest of them all. It was in 2019 when the minister was talking about some aid and assistance from the government to citizens who had lost family members

The minister said the government will give them assistance to ‘bury the bereaved’.

The interview went viral as many were posting to ask how possible it is that a bereaved person is buried instead of the dead.

In another interview, the minister, when talking about separatist fighters in their camps, referred to them as the ‘boyses in the bushes’

Since then, Cameroonians took to social media, mocking the wrong tenses in his language.

A deejay even remixed those seconds of the interview into a two minutes mixed track.

3. ‘Sent A Message Of Condolences’

February 2020, Atanji while conveying words of empathy from the president, Paul Biya to bereaved families, said the president sent him with ‘a message of condolences’

Again, it was one of those moments where social media resurrected the past slips after his wrong use of the plural form of condolence.

‘Kumba in Fako’ came on October 2020 when Atanga Nji visited the scene of the Kumba Massacre. He said on record that Kumba was in Fako Division.

Kumba, according to the map of Cameroon is located in Meme division of the South West region. It is the headqauter city of Meme

5. ‘President Of The Government’

In March 2021, the minister in another interview slipped in talking about the president when he said “the president of the government”.

Atanga Nji was probably referring to the president of the Republic Paul Biya but social media grew wild again, digging all the past slips of the tongue in previous interviews

But Atanga Nji doesn’t seem to care. Although Cameroonians have been ranting on social media, the minister has kept calm as it is normal that everyone, at some point, will have a slip of the tongue in a life time.

And no government authority has made a comment either

Critics have said it’s not okay to make several grammatical errors when you’re a leading figure with English as your first language.

“Mr. Atanga Nji is Cameroon’s minister of territorial administration. In other countries, it is referred to as the “minister of the interior”. Do you know the meaning of the word “interior?”

If you do, then you’ll understand that anyone heading that ministry is supposed to be nothing short of an enlightened citizen. Certain errors are not welcomed

It is not just the errors that matter, but also, the reforms that the minister is supposed to bring to transform lives and improve the standards of living” – a Facebook user by name Ambe wrote on his wall.

Going back on his records, in September 7, 2007, he was first appointed minister in charge of missions to the presidency

In september 2010, he was promoted to permanent secretary of the National Security Council (CNS). This was cumulative with his function of minister.

And in March 2, 2018, he was made Minister of Territorial Administration by a decree from Cameroon’s long standing president Paul Biya

“Atanga Nji Is Running Away From His Crimes” – Paddy Asanga