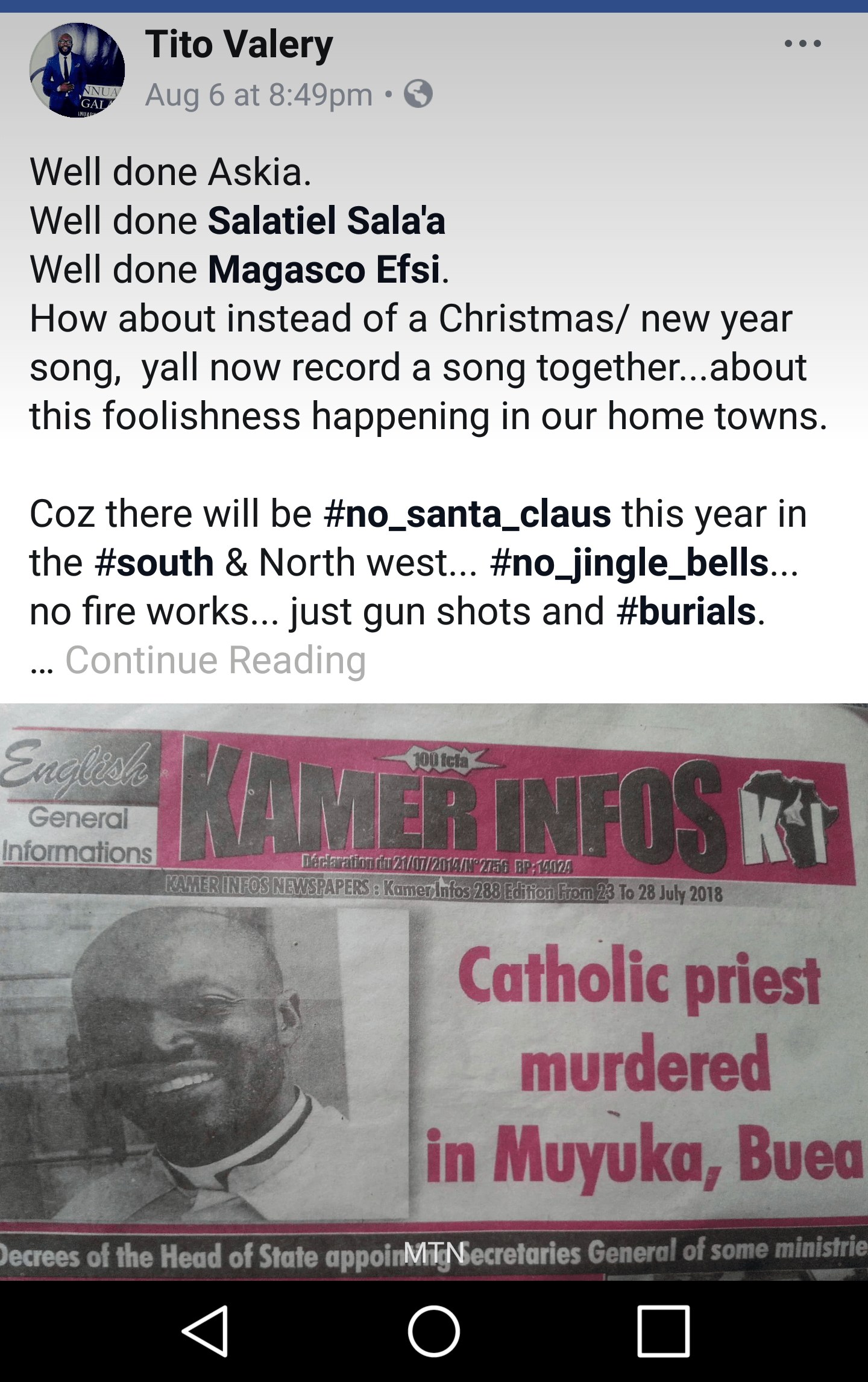 Excerpt: “In fact, any man or woman that makes love, eats or does anything which is not crisis related deserves beating“…

August 6 2018, TITO Valery, a media person puts up a Facebook post about the crisis. He tags some very prominent English artists; the likes of Salatiel, Magasco and Askia .

It was a long debate and the echoes have gone viral. You would be shocked to read SALATIEL’s reply.

He was later joined by MAGASCO and a host of other media personalities. I won’t tell you that TITO VALERY ends up “warning” these artists not to EVER tag him on any love or party songs.
Juiceeeeeeeee !!! … We’d publish the discussions in chronological order and in their exact words.

How about instead of a Christmas/ new year song, yall now record a song together…about this foolishness happening in our home towns. Coz there will be #no_santa_claus this year in the #south & North west… #no_jingle_bells… no fireworks… just gun shots and #burials.

If u dont show concern u expect a stranger to?

Any artist sharing new music about loving Sidonia and all that mumbo jumbo crap should be flogged with a #long mulongo dipped in hot water and red pepper.

(as usual, Tito like DULAFE VALERY, FABZ CHI and other keyboard wizards would always end posts with their names)

And then the replies came. Alpha Beta Records CEO, SALATIEL was early in his reply – why he huzzles for “fap Kolo” !

“Same should be for any journalist that plays any love song on their program, or talk about sports, Music or anything else too should be flogged….

In fact, any man or woman that makes love, eat or does anything which is not crisis related now deserves beating…

We all are in pain and trying in our little ways & doing things in the background but as hard as it is, life continues in all its aspects

If you at least wrote like a big bro and asked what we are doing about it, u would not be here writing this, you be our grand dont do this here pls, u know better. Let people hustle…. things are been done in the back that Will be seen soon.

And then Magasco replied to the tag: Who did he support?  Wule bang-Bang !

” Ah hear u baba Tito.I appreciate the #welldoneness if its recognizing our individual efforts in addressing the crisis. Ur suggestion of a United cry out has been noted baba. But I guess from my understanding it rather came out a little rude from u bro. We also sell music out of Cameroon and u best know some of us have no two ways to make a living. We are all victims and trust me u have no idea how it hurts. Trust me. Jah Bless #createAsolution”

Tito had been teased …

1 – rudeness is in what? The guilt of the truth about priorities being set aside? Journalists and any other function that prioritizes other futile distractions will soon come to the realization that even the radios and tv stations will be shut down. Its the same thing. I will advise u to read on the current and past history of the congos and rwanda. Its a matter of time.

2 -About hustling it is your entire right my brother.  Dont shift+alt my point.

My point is, if u make 20 songs about love and dancing and make one about a situation that you’re living daily for the past 2 years and that’s getting worse by the day.  .. my brother check yourself. U have ur conscience.  I would again refer you to the days of apartheid in S.A . 70 % of the music being made and danced (yes because activism music can be danced and can be played in clubs.  … if u still have clubs anytime soon…) was resistance music or addressed an aspect of the ongoing situation… and you know how rhythmic kwaito is…

I have written and said the same thing about journalists, public figures and other practicing artists.

I recently invited and teamed up with 3 Cameroonian artists, francophone and Anglophone (thus four of us 2 from each cultural background) to produce an exhibition and sound installation, on the current Anglophone problem in London.  I don’t put my mouth where my hands can’t reach. And it might be nothing impactful for now but it at least brought together 100 people who are currently speaking to each other and having cross conversations on how to contribute to moving forward in the smallest of ways.

You Salatiel are one of the most relevant artists now. I can only commend you because as a potential example of dedication u of all people because of the context know what at stake here…

3. About being in pain and trying your little ways… I know that and I hail that. Don’t brush away my acknowledging your individual efforts. Magasco Efsi understood that. Now all I said and I might not have said it with music or with the soothing tone you expected salatiel but my point is and still is… collectively your small efforts are multiplied by a thousand.

For the rest about being flogged… It’s called sarcasm. But u can choose to think otherwise.  Your prerogative bro. One peace ”

” Magasco Efsi This rude matta wey all man di just assimilate na from where? So I need fo ask wouna how fo talk ting wey I want talk make wound tell me how fo tok am? Hahahaha… come on guys.. u know me better than that after all these years. …lol

Back to essentials bro. U got my message from Frank when u were in Washington Dc recently.

I told him… Magasco, minks, Stanley, Leo… all influential artists from the 237 now in the same place… ask them to contribute to the cause by recording a song together…

I gave my reasons.

If I didn’t have to come to yde and handle some family stuff I was going to fly directly to Washington from the UK to have a talk about the current situation.  My brother make we keep this emotional wahala aside.

U understood my point. The more u repeat a sentence or a thought to the same people the louder u get.

Solo is good.  But together more is better and goes further.

Micheal Jackson could have recorded we are the world all alone.  .. he was already the biggest black artist if his time.  But he did with others… why? ”

Job Seeking? ICM is still open to offer jobs in over 30 disciplines in Buea and Douala .

TITO was about ending his course but had one more voice to his . NOELA saw NO rudeness in his post.

“Salatiel Sala’a, apparently you didn’t just get Tito Valery at all. Not even you Magasco Efsi.

The post wasn’t about y’all shifting your hustle to the “struggle” but somehow requesting for a united cry which could go further than we all know and be heard loudest. And who knows…….

And please, can some point out to me where/how rudeness is involved in this write-up? ”

And then Fabz Chi, KESA boss and innovative blogger came in:
FABZ CHI:

” I’m sure Sala will better understand after reading Tito the second time. We are usually quick to judging such write-ups thinking they are aimed at attacking negatively whereas I consider it objective attacks and working for the better future.

Its as simple as saying- Instead of a “Que’s Qui na pas marche” or “Higher Higher” this year, we could have a joint collabo for the current crisis that could hit Africa and the world. Honestly, I see no need clapping back to such posts. Cheers”

” Tito Valery all facts and u also know if we been crying out individually without any one putting pressure means its very possible for a joint cry out. there is nothing like being emotional here cause its already an emotional situation…Artists are easy targets by everyone especially in our struggling industry ple take pleasure to mock us by comparing with Nigerian artists and also use the crisis too to mock and make us look bad like we are the enemies.

We all know the truth. THE SYSTEM IS THE ENEMY.#CreatingAsolution  is my stand and even in a song I will sing it.Your posts kind of sounded like we dont care thats why I said it was rude. Just know Artists not sleeping and always remember we all angry and hurt and doing our best for a change just like you”

And then TITO had a reply to NOELA

” Noela Mbayi rudeness is what ppl see when they refuse to read between the lines.

Magasco Efsi bros… re read my post and my comments.  Too much talk na small. I repeat. YOU HAVE THE POWER – YES THE POWER TO CHANGE THINGS OR TO IMPACT THEM MORE THAN ANY POLITICIAN OR ANY PUBLIC FIGURES.

2 – BEACAUSE THESE EVENTS ARE HAPPENING IN YOUR REGION OF ORIGIN YOU HAVE THE RESPONSIBILITY TO TEAM UP WITH THOSE WHO CARE TO MAKE AMLN EVEN BIGGER IMPACT.

“To those who are given a great power… a greater responsibility. ..”

” In short make no man ever tag me on top some love song or ask me fo share some party song now. All these “wounded artists” thinking I’m being rude wouna hold wouna mop fine. Instead of liking comments,(I think he was replying to some artists who had silently read and liked the comments without saying a word) write one if u have an opinion. Don’t profit from the stench in the toilet to gas(fart). You know yourselves. Circumstance artists.

N:B All posts were published as copied from walls and comment sections.

Dear ARREYB Readers, lets get your thoughts on this issue !