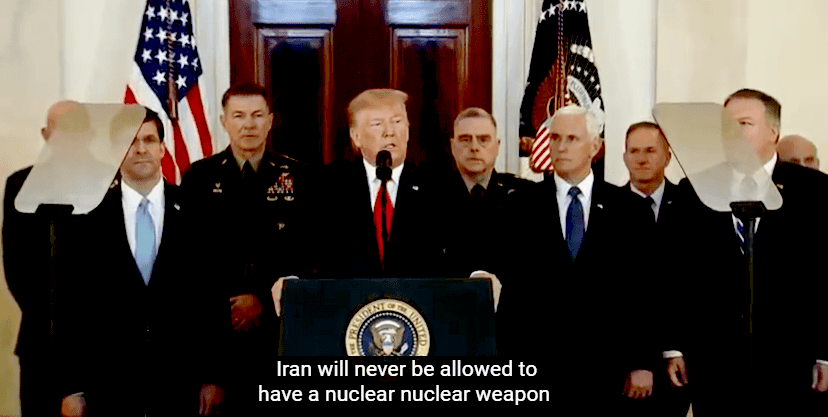 Share this!
After Iran fired a number of missiles at two Iraqi bases housing US troops early today, CNN said in an early morning broadcast that US President Donald Trump had met the biggest test of his presidency; his retaliation after the airstrikes.

Shortly after, the white house occupant bragged on twitter “We have the most powerful and well equipped military anywhere in the world, by far”, adding that he will be making a statement soon.

The US president has declared that he will rather impose economic sanctions on Iran and is calling on Europe to “break away from the remnants of the Iran nuclear deal”, which he called a “foolish” deal and had previously announced the US would abandon.

Trump has not given any details about the nature of further sanctions.

He began by saying “as long as I am president of the United states, Iran would never be allowed to have a nuclear weapon”

Trump’s respond to the missile attack with economic sanction saves the world from an escalating danger and fear of a third word war.

He said last week’s missile assassination of Iranian general Qassem Suleimani was a “decisive action to stop a ruthless terrorist” whose hands were drenched in blood.

It is still nuclear Iran’s response to Trump’s economic sanctions. Watch the entire speech below …

If You’re Boozing, Alcohol Heightens Your Chances Of Catching Coronavirus – WHO

‘Over My Dead Body Will I Take Mandatory Vaccinations’ – Roger Stone