Lady Killed & Dumbed In Nearby Bush By Police Officer In London 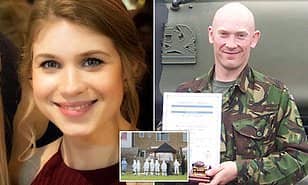 On the evening of 3 March 2021, 33-year-old marketing executive Sarah Everard disappeared in London

She was killed by a police officer, reports said

Since then, the UK has faced instability and protests over the killing

Everard vanished while walking home from her friend’s house. The suspect police, Wayne Couzens, 48, has been charged with murder

The last known sighting of Ms Everard was captured on a doorbell camera just after 9:30pm showing her walking alone toward Tulse Hill, London.

Her body was later found in woodland near Ashford, Kent, a week later.

On Sunday, thousands of people gathered to protest in then form of a virgil, in the area where Sarah was last seen

Although authorities prohibited the gathering over Covid-19 fears, thousands still took to the street with flowers and protesting that no one is safe if the police could kill an unarmed girl

Clashes between police and attendees of the vigil led to several people being arrested for public order and coronavirus regulation breaches.