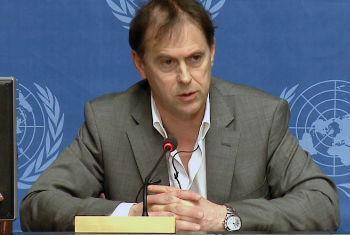 The UN has reacted to the February 14 Massacre in Ngarbuh, village of Donga Mantung division of the North west region, asking Cameroon’s government to carry out a proper investigation.

Spokesperson for the UN High Commissioner for Human Rights, Rupert Colville has condemned the attack on children, women and unarmed civilians. He notes that witnesses of the massacre said they saw 40 members of the security and defence forces.

“The attack on 14 February on a village in Cameroon that left 23 people dead, the majority of them children, is a shocking episode in the ongoing crisis that has afflicted the country’s North-West and South-West regions for the past three years.

We note that the Cameroon Government announced on 17 February that there would be an investigation into the killings and that the findings would be made public. We urge the authorities to ensure that the investigation is independent, impartial and thorough, and that those responsible are held fully to account.

Witnesses said some 40 armed men, including members of the security and defence forces, attacked the village of Ngarbuh, in the department of Donga Mantung in North-West Cameroon, opening fire on people and burning down houses.

The authorities said defence forces and gendarmes came under attack from people inside the village with the exchange of shots igniting a fire that affected several dwellings.

According to information from UN colleagues on the ground, among the 23 people killed were 15 children, nine of whom were under the age of five. The victims also included two pregnant women, one of whom died of her injuries in hospital.

This attack is the latest deadly incident in Cameroon’s North-West and South-West regions where hundreds of thousands of people have been displaced by clashes between security and defence forces and armed separatist groups.

We call on the Government to ensure that the security forces abide by applicable international law norms standards during the conduct of their operations. We similarly remind armed separatist groups of their responsibilities under international law and call on all parties to refrain from deliberate attacks on civilians.

The UN Human Rights Office has been following developments in the North-West and South-West regions as an already tense situation worsened ahead of parliamentary and municipal elections held on 9 February.

The Government deployed some 700 additional troops in the North-West and South-West where armed separatists reportedly kidnapped dozens of candidates, most from the Social Democratic Front which is one of the country’s biggest opposition parties. Most of the candidates were subsequently released. The UN Human Rights Office also received information that voting centres and the houses of those involved in the election campaign were attacked by separatists.

In May 2019, at the end of a visit to Cameroon, UN High Commissioner for Human Rights Michelle Bachelet welcomed the Cameroon Government’s openness to work with the UN Human Rights Office, and the rest of the UN, to seek solutions to the major human rights and humanitarian crises in the country”

In light of the latest violence, the UN urged the Government of Cameroon to take concrete steps to implement recommendations made last year by the UN Human Rights Office.

We reiterated their readiness to help the Government to protect the human rights of people all across Cameroon.

Suggested reading: Ngarbu Massacre: ‘There Will Be More Casualties And Some Will Be Children’ – DDR Cameroon