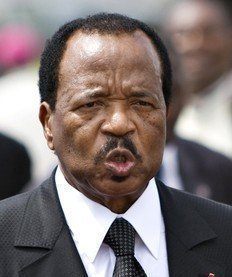 It had been 35 days since anyone saw the president of Cameroon — or, at least, since anyone had revealed his whereabouts — and people in the central African country had questions.

“Sir, are you alive?” one man asked on Twitter.

The public absence of Paul Biya — who, at 87, is the oldest leader in Africa — during the coronavirus pandemic fueled outrage, concern and wild theories before the strongman turned up Thursday in a photo with the French ambassador to Cameroon.

“On the menu for our exchange this afternoon: managing the COVID-19 pandemic in Cameroon, France and around the world,” Biya tweeted.

“You have risen?” someone wrote in response.

“We don’t ask you to receive people,” another said. “We ask you to address the nation.”

The photo surfaced one day after Maurice Kamto, the president’s chief political rival, called on Cameroon’s legislature to declare a power vacancy and hold a new election.

“The question remains the same,” Tayou said. “Is he able and willing to perform presidential function?”

Citizens had been wondering: Is Biya’s hand really signing those presidential decrees? Who is actually behind his Facebook posts?

On social media, Cameroonians demanded to hear him speak about the growing outbreak on their soil.

The nation has recorded 848 cases and 14 deaths. Biya’s ministers have done the talking since the first case emerged on March 6. The top health official tweets daily updates in English and French.

The Senegalese leader has released a video of himself washing his hands. The Ugandan president posted footage of his indoor workout. The Guinean ruler gave a speech with face masks shielding his microphones.

British Prime Minister Boris Johnson, who spent a week in intensive care with a severe case of the virus, allowed cameras to film him this month in a hospital bed.