July 5, 2020, a bill from the parliament said the government was going to regulate the Cameroon entertainment industry.

Artists and actors took to social media to criticise the new law, they felt it was going to be the new cage for their careers

Early today, Cameroonian singer and entrepreneur Wax Dey announced he met the minister of arts and culture in regards to the bill.

Though it had hardly been explained to detail, entertainers roared on social media

“I actually went through some of them and it’s but shameful and heartless for the parliament to have demanded such from the artists. How about investing in the industry?” someone commented

Wax Dey published the details of his meeting on his official website.

And we have shared the exact piece he wrote :

” Yesterday, I led a contingent of artists and actors in the music space – Dynastie le Tigre, Duc-Z, Chilli Wawaye, Chi Chi Ladislav, Divine Verjika, Tino Foy, accompanied by Barrister Tezo Abanda, to speak with the Minister of Arts and Culture, Hon. Pierre Ismaël Bidoung Kpwatt and his team about the new law on artistic and cultural associations. Thanks to Adeline Mbenkum for setting this up, and Highman General Salatiel who has been working in the background as well to facilitate the larger process. This meeting was not definitive – it is only the beginning of a process of consultation with the Ministry of Arts and Culture to make sure that we as artists get the best deal possible for our art, and especially future generations, who do not deserve to go through what we, and those before, have gone through. so we call on other artists to join us as we embark on the process.

A bit of background. The law came as a massive surprise to may urban actors, and the terms of the law that relate to getting approval for collaborations and financing of musical enterprises and events/festivals, or the dues to be paid by artists, among others, has generated anger in the musical milieu.

Many people requested before that I make a statement about this law – conscious of the weight that my word holds, I thought it unwise to speak until I had consulted with my fellow musicians and also with the Ministry itself.

In the meeting, we did not mince our words about our unhappiness with the law and its provisions, but we also used the occasion to raise two pertinent issues that require urgent attention. The need for an 80/20 local content quota of media broadcasters and entertainment venues, as well as better management of ‘droits d’autuers’ (authors and composers’ rights), which requires more participation and leadership by the younger generation.

I won’t go into all the deliberations but here are some of the issues, the response of the Minister, as well as my impressions:

Is the law necessary?

Ministry: Yes, the music industry is not structured, and it impairs our ability to defend big budgets and projects for the sectors before the powers that be, or even to take any meaningful action in favour of artists. The current approach of assisting artists with small subventions for productions is neither sustainable nor impactful.

My impression: There was no structure before, so this should be a welcome move. I was also satisfied by the fact that these associations, companies, guilds and federations are to be set up by artists themselves, and they will have the rubber stamp of the Ministry to decide and run their own affairs – thereby giving artists official powers, backed by the state. This in essence means that the federations will take the current role of the ministry in setting up and approving projects. This law is not going to be rescinded – let’s face reality. We should take advantage of it and organsie ourselves now – so that we make the best of this power that we are being given .

How will it affect private actors?

The industry has grown to what it is today because private individuals (youths) took it up themselves to hustle with practically no government support to build. Does this now seize what they have, and put it under the control of the government, to whom they have to start paying ‘dues’?

Not necessarily. Joining an association, and its resultant structures (companies, guilds, federations) is optional. But it is advantageous to join it because it is the formal structure that validates our profession locally and internationally. So for example, the federation will apply for visas for you for tours, to ensure that artists are not denied visas when they have international opportunities. In addition, the internal rules and regulations, contributions etc are determined by the artist members, and managed by the artist members, independent of the ministry. So we can fix it or spoil it ourselves. Other benefits such as health and disability insurance etc will also be facilitated by these formal structures, which give artists real bargaining powers.

The new law will not necessarily kill activities – in fact, it will open up more opportunities and activities. How?

The new law on decentralization gives more power and financial responsibilities to councils and local authorities at the grassroots level – sub-divisional, divisional, and regional levels. The organisation of formal associations at all these levels will give artists access to local authority funds to develop their trade at that level. In addition, it gives a structure where artists can tour in all the 58 divisions and numerous sub-divisions through the identification and collaboration fo associations under the companies, guild or federations – thereby increasing access of artists to the public and platforms nationwide.

Where to from here?

The application texts of the law are yet to be established. Let us participate and take control of the structure. If we do not, less qualified people may usuro that position, and we be left complaining tomorrow. That is why t is important to expand our base of artists and remain close to the Ministry so that we impact the outcome and application texts, as well as implementation of this law.

The Director in charge let us know that a 2003 law already allocated 60% of broadcast to local content, and 40% to foreign content, and that responsibility is that of Mincom. We said, based on the experience of Nigeria and South Africa, 60% is not enough, and the application is not effective. In addition, it must be an inter-ministerial activity that can be led by MINAC, since MINAC is in charge of the content and MINCOM is in charge of thee broadcast.

The Minister made a suggestion that I find reasonable: That the battle will be long and arduous because of our lack of documentation and structure, two essential elements that have seriously hampered the formal development of artistic enterprises in Cameroon. The road map will be to place that as a priority within our federation (since we have to determine our own roadmap) and gather the necessary documentation necessary for him to take that before the Presidency. When it comes from a federation (as Fecafoot in the case of football), it moves five times as fast because it is a formal, state recognized structure, rather than a group of artists just advocating with no formal, legal backing. 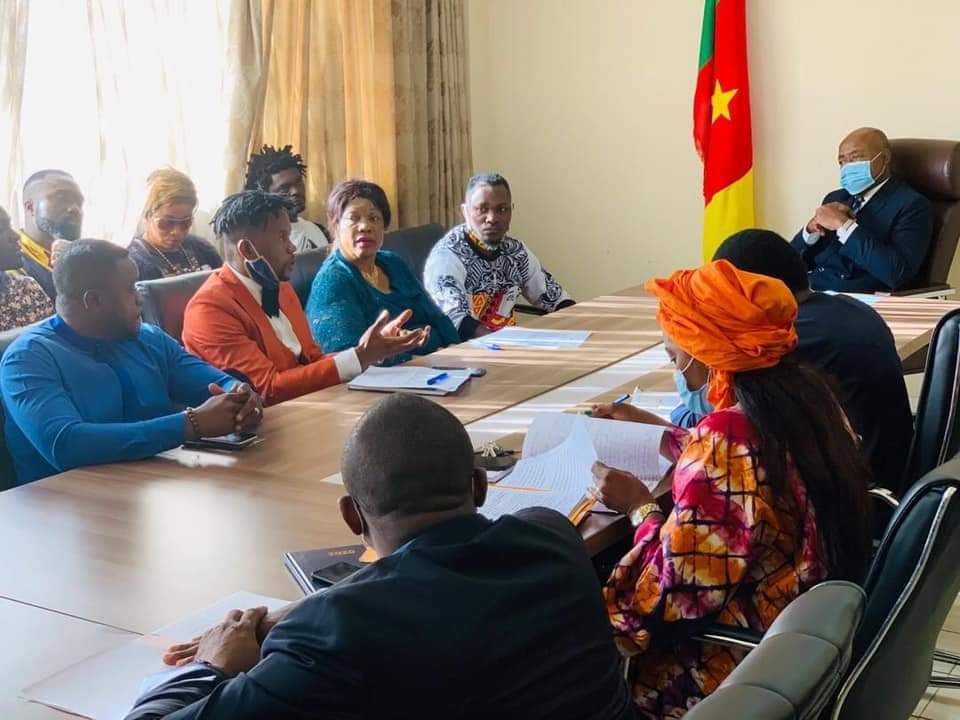 The issue of merit and politicization of the federations?

On the issue of merit, we did not get sufficient answers, and the ministry conceded that it is a problem that exists and will continue to exist, but as a federation, we are best placed to set up our own internal regulations to control it. So for example, what happens if names get changed on lists, or opportunities come up and federation leaders choose those artists that they like, or take off those that they do not like? This is a real problem, and perhaps the answer lies in how we organize and regulate ourselves.

One of the issues we raised with the Minister’s team is that the law talks a lot about punishment for irregular conduct o association leaders, but does not mention incentives for associations that perform well. This is one of the issues that has frightened a lot of people into looking at it from the negative perspective – For example, given the formal structure, associations should be able to apply for investment loans from banks or investment institutions (just like in Nigeria) , or the government should allocate certain benefits to well performing associations. The point was duly noted, and will be taken into account when drawing the application rules of the law.

We have a regulatory law – the law can be an opportunity, if we seize it and make it what we want. Nothing exists as yet. We need to get to work and start building our associations from scratch, giving them our own direction, implementing our own rules and building the industry that we want. We now have a legal structure and independence. The Minister has given us his word, and we will hold him to it.

There are 24 categories of artistic and cultural activity that ned to be federated. Music is only one of them. Culinary arts, plastic arts, producers, fine arts etc are among the art sectors that need to be structured, regulated and developed. So this is a call to all ARTISTS in all categories to engage in this process and make sure that their industries make the best of the situation. It is not just about music.”