“It is very important we talk about peace and corporation between south and south, but how about corporation within a country ? …

What about the problem between the English and French speaking regions in your country (Cameroon), we hear they are fighting…” Mo asked inquisitively but Biya who did not understand English was unable to respond. 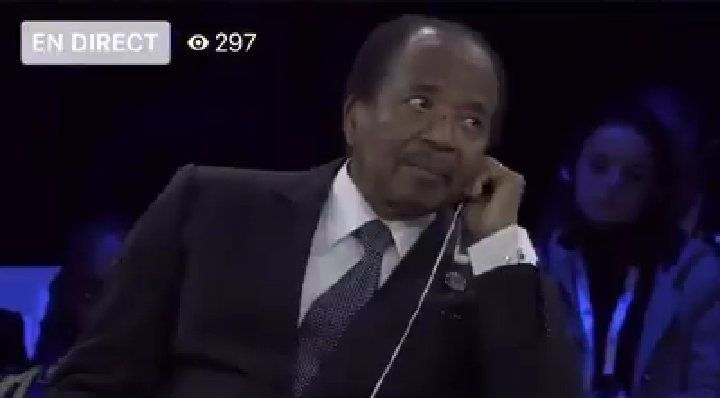 The 2019 Paris Peace Forum held on the theme “Rise Of The South Towards A More Balanced Global Governance System” and Mo Ibrahim who was chairing the conference asked a question in regards to building a balanced system between states as well as within the county.

Critics have said there are hundreds of interpretations to the trending interview; this may simply reveal the true story behind the Ambazonia war, how Paul Biya has been unable to understand English speaking Cameroonians in his country.

To the outside world, it sends a message – a shock that the president of a bilingual country with English and French as official languages, is unable to understand a question asked in English.

In response, Biya announced the putting in place of a special status in the North West and South West regions of Cameroon. This was one of the promises of the Grand National Dialogue which was held over a month ago.

This option has come under much criticism as many Anglophones think a near solution to appease the war turned people should have been federation – to find a common ground for both ideologies of secession and decentralisation. But Biya has blinded his eyes to all federal talks.

Under Biya there has been allegations of indiscriminate killing, burning of villages, rape and humiliation of English-speaking citizens perpetrated by the BIR (Bataillon d’Intervention Rapide)
At least 2,000 people have been killed, more than 500,000 displaced, 200+ villages burnt down with over a thousand people arrested, tortured or detained.

This comes few hours after Members of Brigade Anti Sardinards (BAS) stormed Hotel Le Meurice in Paris, where the 86-year old was lodged, demanding he steps down from power and release of all political prisoners.