The longest serving African leader said Cameroon should look for a peaceful way to solve the crisis rocking its two English speaking regions.

He was speaking yesterday January 23 after a brief indoor meeting with Nigeria’s president, Muhammadu Buhari.

President Obiang Nguema told reporters that every country has its own crisis, what matters is how these crises are solved or handled.

Since its start, the Cameroon Anglophone crisis has left thousands as refugees, several injured and hundreds dead, both civilians as well as the military.

Anglophones say they need secession to a federal state they call “Ambazonia” . 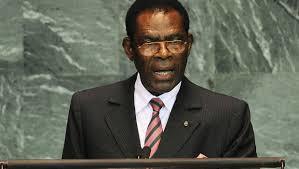 However, it is expected that after the bloodshed and battles, an amicable decision on the dialogue table should be able to end the strife.

Apart from the Cameroon Anglophone crisis, both head of states talked other matters faced by their nations including the handling of the terrorist group, Boko Haram

Stay with ARREYB News Reports for more updates. Join thousands who read and trust us DAILY.