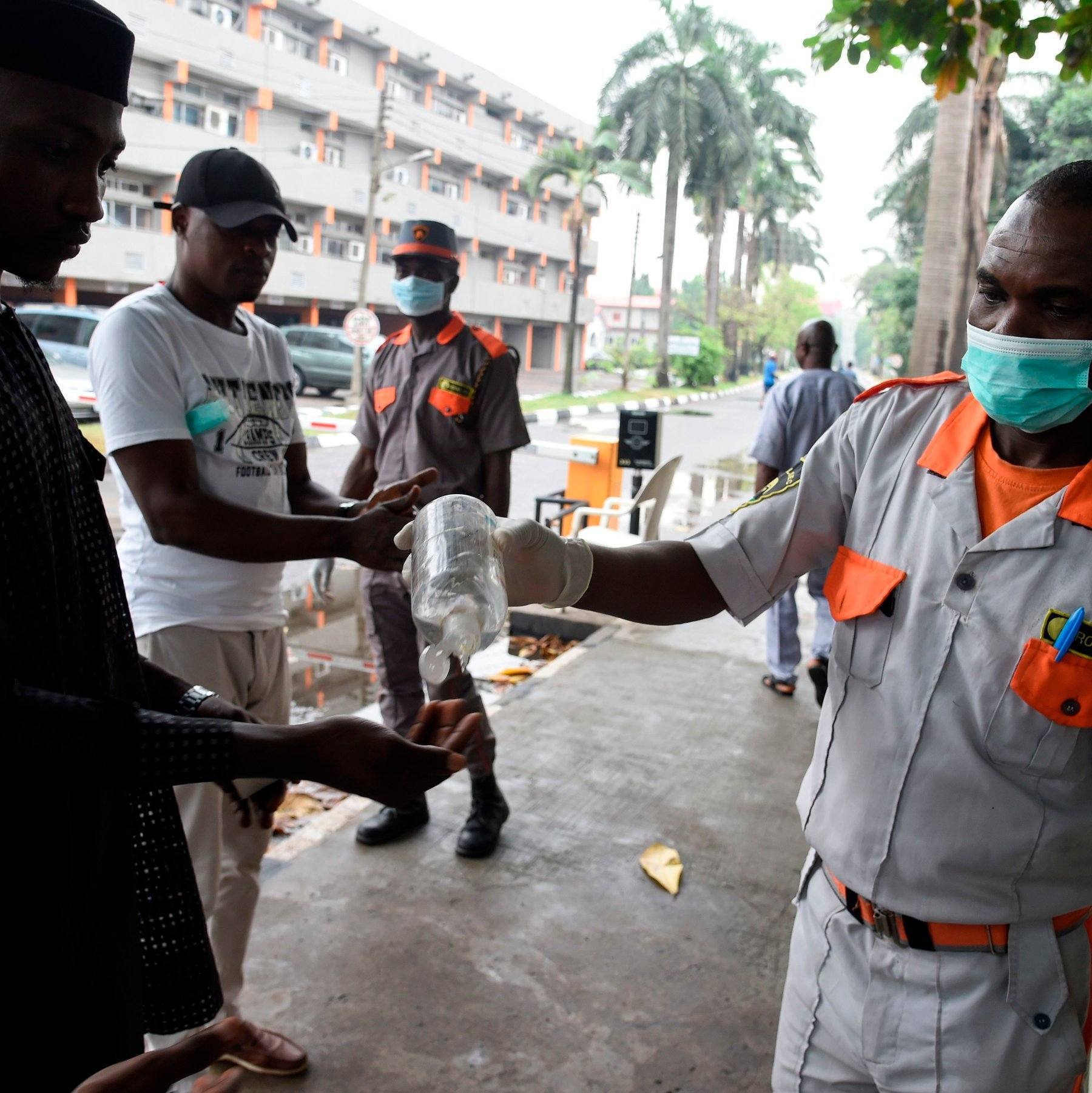 This article is updated every moment.

It shares the latest measures put in place by authorities in a bid to curb and contain the spread of coronavirus in Cameroon.

At the end we share a guide on how to get help if you feel you have the virus, emergency actions and hotline numbers ( This article is free…)

Tuesday March 24, 2020 –  13 new cases of coronavirus in Cameroon have raised the number of infected persons to a total to 69

A post by the minister of  Public Health, Manaouda Malachie announced the first 10 new cases while he called for a meeting to discuss issues around the virus.

In a second release ,the regional delegate of public health for Fako division has called on the population to keep clean after announcing 3 case of Coronavirus in the south west region – 2 in Buea and 1 in Limbe

Between Friday March 20 and Monday March 23, cases of Coronavirus in Cameroon skipped to 56 cases and one death recorded. In a Monday tweet, the minster of Public health announced nine cases in Douala, six more cases in Yaounde and one in Bafoussam.

The first death was reported by veteran footballer and former indomitable Lion, Patrick Mboma who tweeted about the passing of his uncle Achille Essome 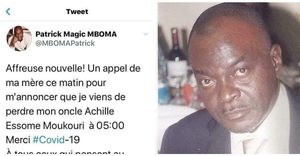 Patrick Mboma Tweets Death of His Uncle Due To Coronavirus


In response to calls to isolate the leader, Public health minster said he did not want to “indulge in unnecessary polemics” and asked Cameroonians not to derail from the objective of fighting the virus.

The speaker tested positive just days after he (Public Health Minister) had instructed that all passengers who got into the country days before should be quarantined for a period of 14 days.

The fact that Cavaye Yeguie Djibril took part in the parliamentary deliberations without respecting the orders of the public health boss, was considered as a silent of disobedience and sent a strong message to Cameroonains that some citizens are bigger than the law.

The same information that was echoed Saturday March 21, 2020, added with calls from citizens requesting that all parliamentarians alongside staff and any other person who came in contact with Hon Cavaye to be quickly quarantined to prevent any further spread of the virus.

Suggested : What should I do if I think I have Coronavirus (Covid-19) In Cameroon ? (Read Below)

Friday March 20, 2020 – A tweet by the minister of Public health Dr. Manaouda Malachie has revealed that seven new cases of Coronavirus have been discovered in Yaounde.

“We note that many continue to fail to observe the required hygiene measures and the rules laid down by the Government. I remind you that by doing so you are putting your life and that of others at risk. This morning, we have 7 new cases in Yaoundé. Vigilance” – the minster wrote

In response to the outbreak of the virus in Cameroon, CPP national president, Edith Kah Walla has urged the government to make special arrangements for health care workers and all other frontline workers in Cameroon.

Kah Walla called on the government to consult with private sector officials, electricity and telecommunications operators to ensure availability and access to services at reduced costs, to adopt a budget, create economic forecasts and decisions to ameliorate the effects of Coronavirus in Cameroon.

This bid comes at a period when the English speaking regions of Cameroon are groping in darkness as Cameroon’s monopoly electricity supply company Eneo has failed to provide constant power supply for the past weeks.

Thursday March 19, 2020 – A video post by Cameroon’s first daughter Brenda Biya appreciating her father has made rounds on social media. It is believed that president Paul Biya hired a private jet to evacuate his daughter to Cameroon following an increase in the cases of coronavirus in Switzerland.

“Thanks daddy I’m coming home” – Brenda wrote appreciating her father with photos and videos of a luxurious plane trip and map route showing her travel from Geneva-Switzerland to Yaounde-Cameroon.

Infections in Switzerland jumped on Sunday by nearly 1,000 cases in 24 hours to 2,200 and 14 deaths were recorded from the virus across the country. By Wednesday March 18th that toll had risen to 19 with confirmed cases at 2,700

Meanwhile, cases of coronavirus in Cameroon have jumped to 13 with the most recent two confirmed in Baffoussam, capital city of the west region.

On Wednesday March 18, panic broke out in Dschang, West region with the announcement of two cases of coronavirus registered from the Dschang district hospital.

In response, a press conference organised by the mayor of Dschang, Jacquis Kemleu Tchapgou has debunked all claims that anyone in Dschang was affected.

”Unfortunately, I would like to announce the registration of 5 additional cases in Yaoundé in Cameroon, thus bringing to 10 patients in our country. Each of us can stop the circulation of this virus by taking prescribed distancing measures ”

Few hours after the announcement, lectures were partly suspended in the University of Yaounde 1. A communique signed by the school authorities under Prof. Maurice Aurelien Soso halted lectures holding in amphitheatres 1001, 1002, 1003, 501, 502, 300, 250 and 200 until mid April

Of all the cases of the virus in Cameroon, no death has been recorded. The government said two of these patients had recovered

In the first case, the Ministry of Health reported that it was a 58-year old French citizen who arrived in the country on February 24, 2020. They said he had since been quarantined.

What really is Coronavirus (Covid-19) ?

It’s a respiratory illness which belongs to the same family as the common cold. According to the WHO, more than 80 percent of patients infected with the virus have mild symptoms and recover, while 14 percent develop severe diseases such as pneumonia.

Around five percent of cases are considered critical, while only 2 percent prove fatal. The elderly and people with conditions that weaken their immune system are most likely to develop severe symptoms.

Coronavirus could have spread from a Wuhan laboratory which housed 600 bats which attacked and “peed on” scientists, experts say.

One researcher at the Wuhan Center for Disease Control (WCDC) who was urinated on, also had bat BLOOD on his skin and was forced to quarantine himself, an academic journal published. Scientists at South China University of Technology in Guangzhou believe the lab could be a possible origin of the deadly pandemic.

The facility is located 300 yards from the infamous Wuhan food market where the Chinese government claimed the outbreak – which has killed over 1,500 people –  started in December.

Written by Botao Xiao and Lei Xiao, the research journal claimed WCDC “hosted animals in laboratories for research purposes”, including 605 bats captured in nearby provinces.

The paper, titled ‘The possible origins of 2019-nCoV coronavirus’, reports that one researcher named only as JH Tian “was once attacked by bats” and that “the blood of bat was on his skin.”

Earlier in March, the first scientific evidence revealed that the virus DID come from bats and is a version of SARS – a pandemic in 2002-2003 which killed 774 people.

Experts have claimed that up to 60 per cent of the world could contract coronavirus – a figure that could also be applicable to Britain. Out of the infected population it is estimated that 1 per cent could die, which in the UK’s case would be hundreds of thousands of people.

What are the symptoms of Coronavirus (Covid-19) ?

The initial symptoms are not dissimilar to the common flu, as the virus belongs to the same family.

The symptoms include a cough, headache, fatigue, fever, aching and difficulty breathing.

Its incubation period is two to 14 days, with an average of seven days.

You can find the latest information about the coronavirus from the WHO. In order for someone to catch the coronavirus, that person must spend more than 15 minutes within two metres of an infected person, Swiss health officials have said.

What should I do if I think I have Coronavirus (Covid-19) In Cameroon ?

If you think you have the virus in Cameroon, do not go to hospital and do not panic. Health authorities are worried about potentially infected people turning up at hospitals and passing on the virus to others.

You should alert health authorities and then self-isolate. Call these emergency numbers for help 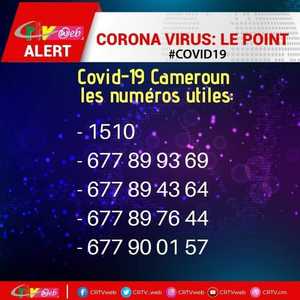 Emergency Contacts for Coronavirus in Cameroon