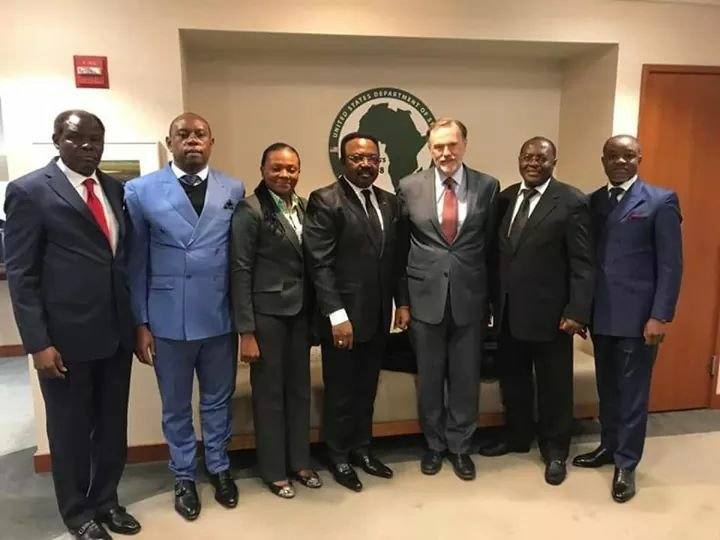 October 31, 2019, when US president Donald Trump announced his intention to terminate the eligibility of Cameroon for trade preference benefits under the African Growth and Opportunity Act (AGOA), two Cameroonian ministers stood up to challenged Trump’s declaration of poor human rights in Cameroon.

Trump notifying the Cameroon government and US Congress, said it is due to persistent gross violations of internationally recognized human rights.

That the government of Cameroon currently engages in gross violations of Internationally recognised human rights, including extra judicial killings, arbitrary and unlawful detention and torture.

“This decision does not concern Cameroon. Our defense and security forces are highly professional” Atanga Nji added, blaming secessionists for the violence.

Communication Minister, Rene Emmanuel Sadi equally said Trump’s declarations did not correspond to Cameroon. That the US was ignorant of the situation in Cameroon, the suspension of Cameroon from AGOA is a “non event”.

“The government of Cameroon categorically rejects these allegations against its professional forces, it is a desire to weaken Cameroon institutions and undermine the morale of her defence and security forces” he proclaimed on state broadcaster Cameroon Radio Television.

Cameroon delegation to US With Ambassador Tibor Nagy

After bragging that US suspension of Cameroon from AGOA was a non event, the Yaounde government has sent a delegation to the US to meditate and bring reconsiderations on the trade .

The African growth and opportunity act allowed Cameroon to benefit from trade preferences on the American market.

According to the American Embassy in Cameroon, the country has export $ 220 million (about € 181.5 million) of goods to the United States in 2018, including $ 63 million (57 Million Euros) “under the AGOA” (reported The Voice)

The Cameroonian Delegation comprised of Members of Government led by H.E. Felix Mbayu, and high level officials like Oumar Chimoun, currently Director of America’s Affairs at the Ministry of External Relations (Minrex) and former under Secretary at the embassy of Cameroon in the USA in charge of the AGOA portfolio, held a meeting with the United States Assistant Secretary of State for African Affairs, Mr Tibor Nagy on Monday 25 November 2019.

This comes few days after ambassador Tibor Nagy told the US Congress that the Biya government won’t win the war in Southern Cameroons with a military strategy.

While the outcome of this meeting is expected, Cameroon’s Anglophone regions are still embroiled in a cycle of deadly violence that has claimed 2000+ lives and uprooted more than half a million people from their homes.