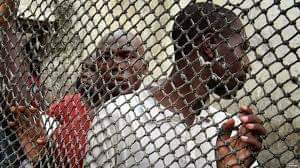 Yesterday in Yaounde, Cameroon’s minister of Territorial Administration, Paul Atanga Nji with instructions from President Biya has asked authorities to beef up security after the recent protest at the Kondengui prison.

Among other security issues in Yaounde, the minister cited the incident at the Kondengui prison early this week and an increase in robbery through the use of commercial motorbikes and taxis in Yaounde.

Atanga Nji asked security personnel to stay alert to prevent the escalation of any further protests.

In response to other political happenings, the minister noted that “last year’s presidential elections was over and should not be an excuse for political parties to create disorder”. He urged authorities to serve as peace keepers within their areas of jurisdiction.

However, critics still question how beefing up security at the prisons will lead to a solution in the current Cameroon Anglophone crisis.

In a previous article we published, the over 200 prisoners detained at the Yaounde Kondengui prison in relation to the Cameroon anglophone crisis, staged the protest asking for freedom as a prerequisite for school resumption in the Anglophone regions.

The prison inmates gathered their load to return home and prepare their children for the 2019/2020 academic year.

It is yet unclear if any reaction from the authorities have addressed this issue of freedom.

It is over 3 years of the Cameroon Anglophone crisis, more than 1.000 people have been detained in relation to tensions . Some are released hours after detention while several remain in prison.