President Paul Biya has ordered the release of all those arrested in the course of the Anglophone struggle in Cameroon.

The president has given standing orders to the judges at the military tribunal in Yaoundé to release Ayah Paul, Agbor Bala, Fontem Neba and all those incarcerated at the tribunal latest tomorrow.

This was one of the prerogatives for dialogue as presented by the striking population of Anglophone teachers and lawyers.

All those arrested on December 9 in Bamenda and December 15 in Kumba are to be released among the multitude of protesters during the strike in various parts of the English speaking regions.

A core reason for the release of these Anglophone detainees is to ensure a smooth start of the academic year, prepare a framework for dialogue and facilitate the work of the Ad-Hoc committee.

The Yaoundé military tribunal had kept over 41 suspects after an investigation. CIR senior political analyst has opined that the figures presented by government spokesman, Issa Tchiroma could be doubted.

Many of those arrested during the incident of 28 November in Buea are yet to be accounted for. 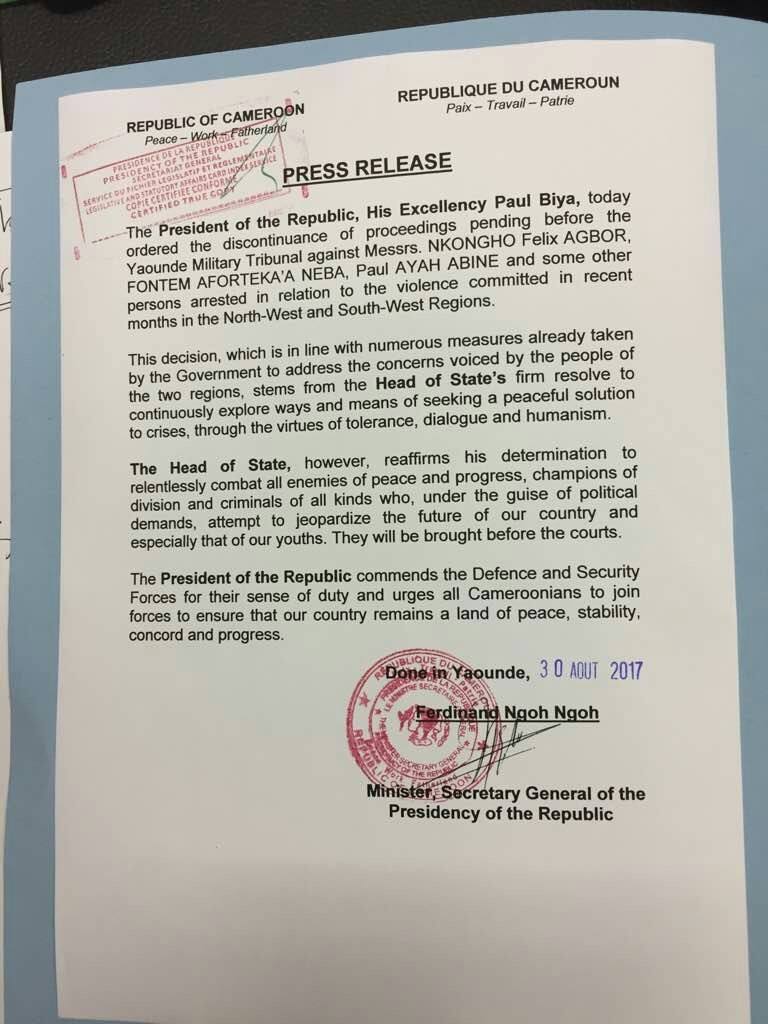 However, at the moment of this instant report, the Consortium said schools would start in Anglophone Cameroon on the 9th of January while the ghost towns will remain effective. (CC reports)

One thing ARREYB political analysts worry is a statement which is yet to be made concerning those on exile as a result of the crises.

Barrister Akere Muna Speaking to ARREYB, proposed a framework to solve the Anglophone Problem, one of which was to release all Anglophone detainees and grant freedom to all those who fled at the wake of the struggle. Would all these be implemented? or Would the release mean a holt in the struggle?
More would be unveiled to you as it breaks.