Inmates of the Kondengui central prison have raised an alarm about the dissapeance of Itoe Henry, a fellow detainee

The inmates say Henry was taken to the hospital for treatment on June 18, but till date, no word has been heard of him

Before then, on April 10, Itoe Henry appeared on a video begging for financial help to undergo an operation

“I have an operation and the doctor said I am sick of hernia, please I need one hundred thousand francs so I can go for treatment

Please help me! I have been sick for quite a long time now with no solution, my brothers in the diaspora please help me” Henry pleaded in a recorded video from prison, sitted bare body and coughing loudly

Henry’s whereabout is still unknown, and the government is yet to make any official statement.

In a recent note, detainees have hand-written to the Minister of justice, requesting for Henry’s liveless body since his operation.

They’re afraid he should have been killed like others 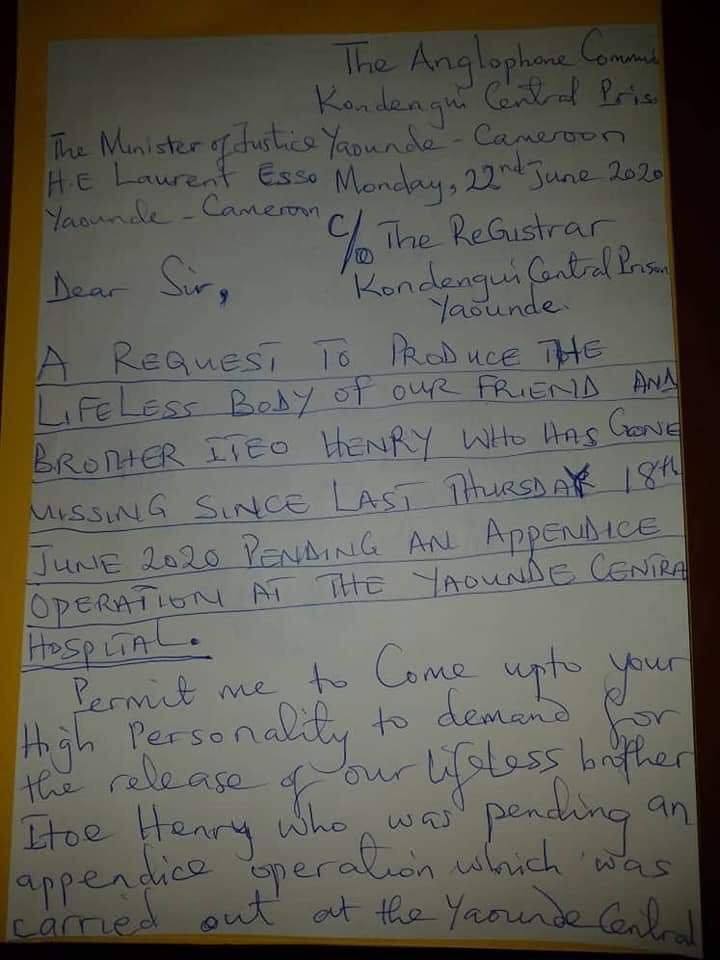 Henry and 8 others were picked up from a hotel in Calabar, Nigeria in March 2018 and forcibly returned to Cameroon to be detained at the Kondengui dungeon

On September 9, 2019, the court of first instance presided by Justice Ndema convicted Henry and 11 others including journalists Thomas Awah and Penn Terence for the offences of collective resistance

In a similar situation last month, journalist Samuel Wazizi was declared dead after 9 months of his arrest.

Wazizi was arrested, tortured, detained and let to die in August 2019, but news only broke out in June 2020

The Cameroon government has kept a repressive style, and has never been booked to account in the numerous deaths and disappearances of inmates, journalists and citizens