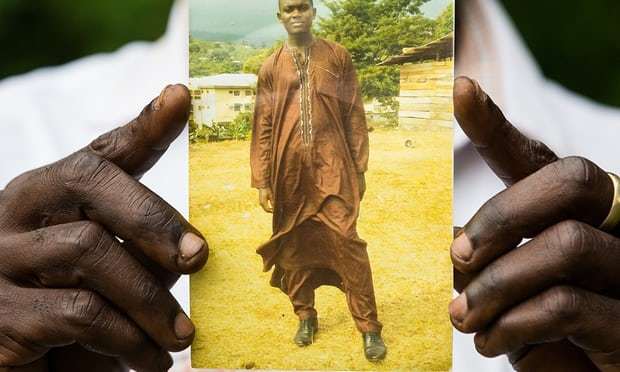 Human rights groups are calling for the immediate release of three students given 10-year jail sentences in Cameroon for sharing a joke via text about Boko Haram.

Fomusoh Ivo Feh, one of the students locked up

An appeal hearing was due to begin on Thursday in the capital, Yaoundé, but has been postponed until 19 October. The students were found guilty of “non-denunciation of terrorism acts” by a military court on 2 November last year.

They were arrested in December 2014, after one student, Fomusoh Ivo Feh, forwarded a text message he received to his friend, Afuh Nivelle Nfor. The message said: “Boko Haram recruits young people from 14 years old and above. Conditions for recruitment: 4 subjects at GCE, including religion.”

Nfor, in turn, sent the message to a third student, Azah Levis Gob. A teacher, who confiscated the phone, saw the text and contacted police who arrested them. The trio were transferred to a prison in Yaoundé, in January 2015, with their legs chained at the ankles, Amnesty International said.

The text was intended as a comment on the difficulty of finding a good job without being highly qualified, the joke being that even Boko Haram won’t recruit without good exam results.

The Islamist group has killed more than 20,000 people in the region since the insurgency began.

Rights groups have criticized anti-terror laws in Cameroon as overly broad, with the potential for abuse. A report published on Wednesday by the Committee to Protect Journalists said anti-terror legislation introduced in the country in 2014, was being used to silence critics and suppress dissent.

“These students should not have been languishing in prison simply for exercising their right to freedom of expression” Ilaria Allegrozzi, Amnesty International

Amnesty International, backed by two local human rights organizations, called on the Cameroonian authorities to release the students, who they say were exercising their right to freedom of expression.

Ilaria Allegrozzi, Lake Chad researcher for Amnesty, said: “Today’s appeal is an opportunity for the authorities to show the world their commitment to righting this injustice by immediately and unconditionally releasing these three students.

“Rather than languishing in prison simply for exercising their right to freedom of expression, these three students should have been playing a valuable role in Cameroonian society.”

Cyrille Rolande Bechon, executive director of Nouveaux Droits de l’Homme-Cameroun, said that a sarcastic SMS could not possibly constitute grounds for imprisonment. “These students do not belong behind bars and must be allowed to continue their lives without further delay.”

Maximilienne Ngo Mbe, executive director of Réseau des Défenseurs des Droits Humains en Afrique Centrale, said: “These three students should never have been arrested in the first instance as they have only exercised their right to freedom of expression.”

The three were charged under the Cameroonian penal code and Cameroonian military code on 3 March 2015.

The organizations also called on Cameroonian authorities to release other individuals detained on charges related to national security. They include Ahmed Abba, a journalist for Radio France Internationale’s Hausa service, who is serving a 10-year sentence, Aboubakar Siddiki, leader of the political party Mouvement Patriotique du Salut Camerounais, and Abdoulaye Harissou, a well-known notary, who has been in detention for more than three years.

Cameroon’s President Paul Biya, who took office in 1982, is one of the world’s longest-serving leaders. Critics say he is becoming increasingly authoritarian since presidential term limits were removed in 2008.

First published on THE GUARDIAN