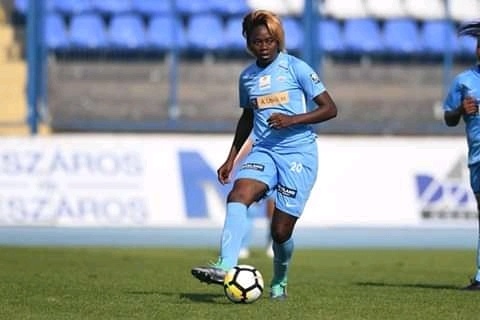 Cameroonian Indomitable Lioness Gaelle Deborah Enganamouit has announced that she is off from professional football.

The 28-year-old football star made her resignation public in a post she shared on Instagram on her 28 birthday.

“End thanks for all”, Gaelle Enganamouit posted.

The striker has been away from the pitch for some time now as she struggled to recover from a recurring anterior cruciate ligament injury.

She has been without a club since April 2019 when she mutually parted ways in April 2019 with Spanish Malaga FC.

Born on 09 June 1992, the Indomitable Lioness became the first African woman footballer to score a hat-trick at the FIFA Women’s World Cup in Canada where she scored 3 goals for Cameroon giving the country a 6-0 win against Ecuador.

Enganamouit was later crowned African Woman Footballer of the year in 2015.