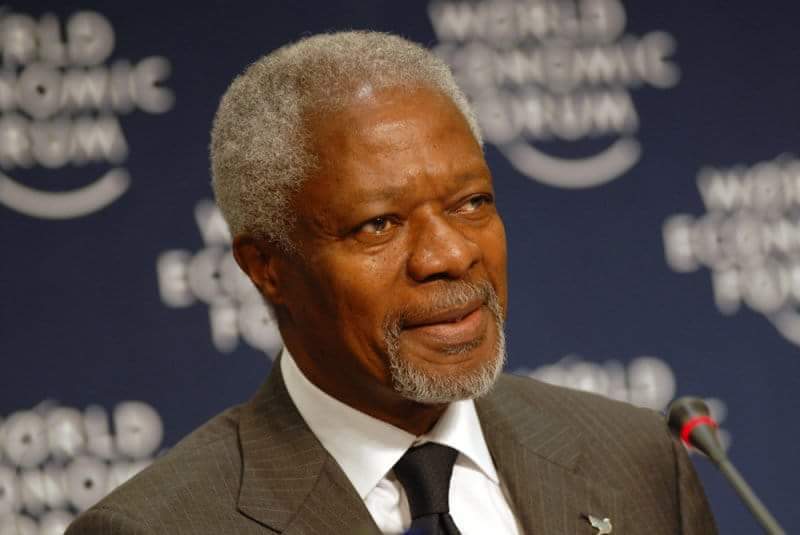 Former United Nations Secretary General, Koffi Annan has died at the age of 80. Here are the reasons advanced for his death ;
ARREYB News Reports learned from Mr. Annan’s foundation that he died of ill health .

Here is an excerpt of a report they published early today August 18, 2018 :

“It is with immense sadness that the Annan family and the Kofi Annan Foundation announce that Kofi Annan, former Secretary General of the United Nations and Nobel Peace Laureate, passed away peacefully on Saturday 18th August after a short illness”.
In respond to his death, the present UN Chief Antonio Guterres has expressed sadness for the passing away of his predecessor and says he was “a guiding force for good”.

Guterres added that Kofi Annan was “in many ways seen as the man who rose through the ranks to lead the UN organisation into the new millennium with matchless dignity and determination” .

Mr Annan was also a Nobel Peace Prize winner and was the first black African to take up the role of the world’s top diplomat, serving the UN in two terms  from 1997 to 2006.

He died in Switzerland. RIP to a legend

Thousands read and trust ARREYB News Reports DAILY . We are arguably Cameroon’s most read news site. Get to us daily for updates from Cameroon, Africa and the world