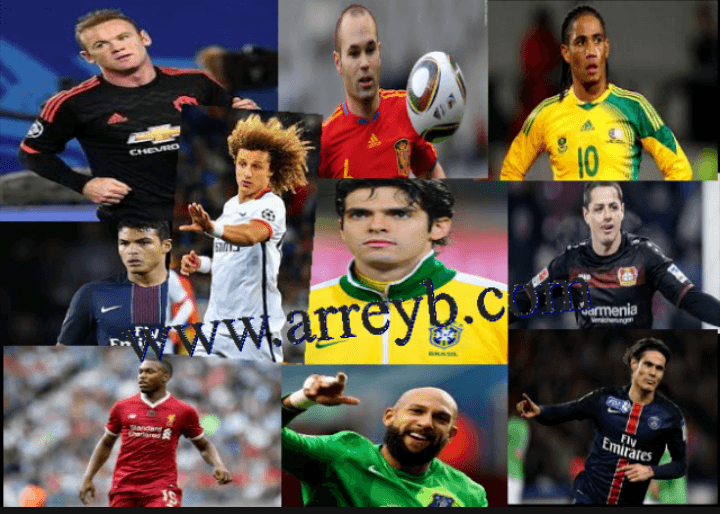 When fortune and fame hits home, especially that which comes with a highly successful international football career, it becomes a challenge keeping our values, beliefs and religion.

With an estimated two billion Christians in the world, how many practicing Christians can you name from the English Premier League, Spanish La Liga, and other international leagues?

Here is a list of top ten international footballers who have often times professed their allegiance to God either through their way of life, social media posts, or vows publicly made to God, and of course their goal celebration patterns as reported by Praise World Radio

The former Everton goalkeeper is currently plying his trade at Colorado Rapids.

The United States international is a practicing Christian, who considers Jesus Christ most important in his life.

“The most important thing in my life is Christ. He’s more important to me than winning or losing or whether I’m playing or not. Everything else is just a bonus.”

He is also involved with Athletes in Action, a ministry arm of Campus Crusade for Christ.

The Uruguayan striker for several years has embraced the Christian faith and come to be part of that group of professional athletes in all discipline who share love for Jesus Christ and recognize him as the Lord and Savior of their lives.

The official site of the Athletes of Christ explains, ‘These athletes have the responsibility to live a Christian life to the unanimous will of God in the world of sport’.

Cavani who makes no secret of his faith decided to tell it all in a book he published titled ‘Quello che ho nel cuore. Vita, calico e fede, meaning ‘Series of Enlargements’.

The Sunderland Midfielder and South African player literally wears his faith on his sleeve: on more than one occasion after scoring he has revealed a vest with the words– “God is great’’.

A strong Christian upbringing helped the 30 year-old Ex- Ajax, Borussia Dortmund and Spurs star, find Christ- “My Mum is a very  committed Christian and was always on my case’’, he smiles. “No-one can force you to believe, though. I just listened at Church and everything made sense”.

And about the vest- “I wear the vest because God is truly great. He is on high. I believe he is with me and the angels are guiding me on the pitch and the vest is a way of acknowledging this”.

The 28 year old Liverpool striker has revealed that he reads the bible every morning. He said his love for the book came from his parents who urged him to read it on Sundays.

According to him; “That was important for me growing up. It’s part of my routine and I do it every day”. After winning the Barclays player award of the month, he said “I do all through Christ who strengthens me”.

Andrés Iniesta Luján is a Spanish professional footballer who plays as a central midfielder for FC Barcelona and the Spain national team. He serves as the captain for Barcelona.

The 33 year old player is married with kids and is often known to not only talk about his religion but also travel for pilgrimages.

His pre-match routine sees him kneel on the halfway line with his palms outstretched. Popularly known as ‘Chicarito’. The 29 year old footballer plays for both his country (Mexico) and also recently transferred to West Ham United.

He is a devoted Roman Catholic. Javier once speaking about his faith said;

“I like to ask God to take care of me because he gave me the opportunity to play. I talk to God and I let him take care of the health of both teams because the worst things for a sportsman are injuries and there are a lot of accidents on that pitch that nobody wants.”

International football star and ex Chelsea defender vowed to abstain from sex until after he is married in an Instagram post which included his baptism.

He posted a message alongside the picture which read “I have chosen to wait’. Luiz said he will abstain from sex until he marries girlfriend Sara Madeira, according to Telegraph

He then added; “How wonderful to live with you Lord, thank you for loving me so much and taking care of me! My life is yours and I am your servant! You are always in the centre of all my decision. I love my God! Amen”.

Rooney is an English football player, a Catholic, and appears to be quite religious. In the year 2002 he was seen wearing a rosary around his neck during practice and he was questioned by a reporter -he replied – it’s my religion……”

The reporter stopped him saying “we don’t do religion here”. Luckily, Rooney who is an astute defender of the gospel replied saying “….. Right from my teenage I pray to God to win football games, now that I am an adult, I take my faith even more seriously…”

His life can easily be defined in C.S Lewis’s write up, ‘there are no ordinary people. Thiago Emiliano Da Silva is a skillful defensive back who always showcase his Christian faith before and after the game. His frequently seen praying.

Though born desperately poor, he lived near a dangerous shantytown in the city of Rio de Jameiro, he was able to overcome these hardships and achieve great success in the eyes of the whole world.

He is a professional soccer player; winning many prizes in the history of world’s soccer. He has also been named as one of the top players in Europe for three consecutive times. This lifestyle of his shows he is committed to his career and dependent on God for heavy support.

Christain Football Players – KakaRicardo Izecson popularly called ‘Kaka’ is a Brazilian professional footballer who plays for Orlando city and also Brazilian national team. Kaká is a devout evangelical Christian who was an active member of the São Paulo-based Rebirth in Christ Church.

He removed his jersey to reveal an “I Belong to Jesus” T-shirt and openly engaged in prayer moments after the final whistle. He also had the same phrase, along with “God Is Faithful” stitched onto the tongues of his boots.

In goal celebrations, he usually points to the sky as a gesture of thanks to God. KAKA’s first encounter with God happened after a near-paralyzing swimming pool mishap, he gave his life to Christ and later had a full recovery from the pool accident which can only be God.

Kaka and his wife met in 2002 and were married 3 years later in 2005 and unlike majority of athletes; they were both virgins on their wedding day.

Here is our list of the top ten international footballers. Do you feel there is a Christian footballer left out? Why not add it in the comment section.