​Ethiopia To Free All Her Political Prisoners  - ARREYB

​Ethiopia To Free All Her Political Prisoners 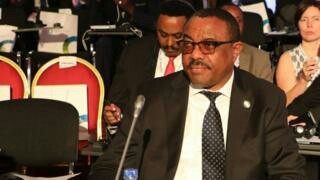 Ethiopia’s prime minister has announced the release of all the country’s political prisoners.

Their release he says will come with the closure of a notorious detention centre renowned for allegedly torturing political prisoners. “The prison will now become a modern museum”.
Prime Minister Hailemariam Desalegn in a press conference said charges would also be dropped for those still awaiting trial.

Over the years, human right groups have accused the government of using anti-terrorism laws to jail opposition members.

A new detention centre will later on be opened which according to the PM would comply with international standards.

Reports say the number of political prisoners in Ethiopia already stands at thousands and this release will be a big relieve to many families whose loved ones have been incarcerated for months.