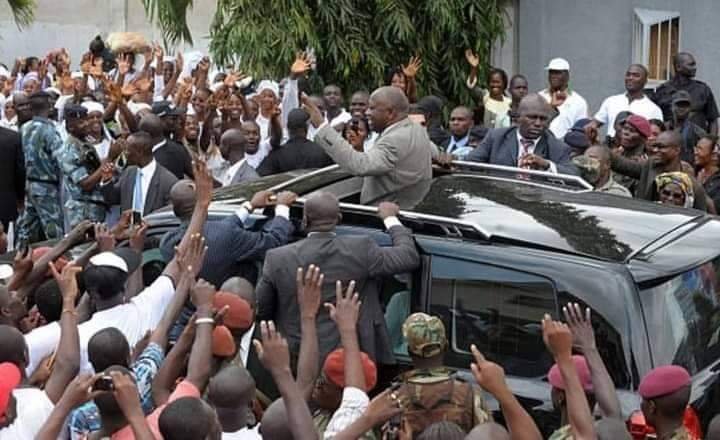 In Ivory Coast, former president Laurent Gbagbo has returned to the country after over 10 years on exile

Gbagbo returns with his youth minister Charles Ble Goude, the two were on exile and were widely accused of instigating the post-election violence that engulfed Ivory Coast in 2011

He was imprisoned in the early 1970s and again in the early 1990s, and he lived in exile in France during much of the 1980s as a result of his union activism.

Gbagbo founded the Ivorian Popular Front (FPI) in 1982 and ran unsuccessfully for president against Félix Houphouët-Boigny at the start of multi-party politics in 1990.

He won a seat in the National Assembly of Côte d’Ivoire in 1990.

Gbagbo claimed victory after Robert Guéï, head of a military junta, barred other leading politicians from running in the October 2000 presidential election.

The Ivorian people took to the streets, toppling Guéï. Gbagbo was then installed as president.

In the 2010 presidential election, Alassane Ouattara defeated Gbagbo, and was recognized as the winner by election observers, the international community, the African Union (AU), and the Economic Community of West African States.

However, Gbagbo refused to step down, despite mounting international pressure.

The Independent Electoral Commission (IEC) announced that Ouattara had won the race with 54% of the vote, a tally that the United Nations concluded was credible; however, the Constitutional Council, a body dominated by pro-Gbagbo members, annulled the results in Ouattara’s electoral strongholds in the north, claiming fraud, and declared Gbagbo the winner with 51% of the vote.

In December 2010, both Gbagbo and Ouattara assumed the presidency, triggering a short period of civil conflict in which about 3,000 people were killed.

Gbagbo was arrested the following year by pro-Ouattara forces, who were supported by French troops.

Gbagbo was extradited to The Hague in November 2011, where he was charged with four counts of crimes against humanity in the International Criminal Court in connection with the post-election violence.

He was the first former head of state to be taken into the court’s custody. In January 2019, an ICC panel dismissed the charges against Gbagbo and one of his former ministers, Charles Blé Goudé, determining that the evidence presented was insufficient to prove that the pair committed crimes against humanity.

His return is seen as a test for the country and a population that still has the 2011 bloody conflict fresh in memory.