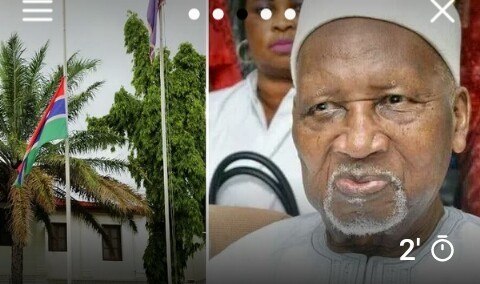 The Gambian government has ordered that all flags fly at half mast in memory of late Sir Dawda Jawara the country’s independence hero, first prime minister and president.

President Adams Barrow on Tuesday confirmed reports that the former leader had died at the age of 95 at his residence in Fajara.

Barrow led a cabinet delegation to pay condolence visit to the home of Jawara who led Gambia from 1965 till 1994 when he was ousted in a bloodless coup led by exiled leader Yahya Jammeh.

“The public is hereby informed that the State funeral for former President, Sir Dawda Kairaba Jawara is scheduled for Thursday 29th August 4:00pm at National Assembly” an announcement from the presidency they added.

Gambians took to social media to mourn memories of the tiny West Africa nation’s founding father. The president described the demos as a great loss to the country and humanity in general.