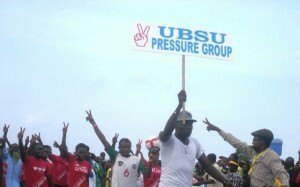 Since its suspension in 2012, the University of Buea Students Union, UBSU has been silent on the Campus of the University Of Buea (UB)
The student governing body was dreaded to be radical for its activities hence after taking over office in 2012, former Vice Chancellor, Dr. Nalova Lyonga declared its activities null on campus.

To her, UBSU’s aim was to fan the flames of violence on campus and cause students to go radical. The Union grew so powerful; a word from its then president or leaders could set the campus in chaos.

Nalova’s nullification of UBSU came with the creation of faculty and departmental presidents who headed various associations to govern and represent the various student bodies in official matters and acting as a liaison between students and the administration.

Few years after the ban, hatched plans to revive UBSU on campus have been leaked.

Students have been holding secret meetings to bring back this group. On several occasions they tried to bring back this union but failed especially with Dr. Nalova’s placed injunction on all activities and crack-down plan on any dissenting voices.

Students argue that the group was a neutral movement which stood for the rights and desires of the students. They hold the opinion that UB would be a better place for students should UBSU be brought back to lamplight.

UB’s former vice Chancellors like Professors Vincent P.K Titanji and Dorothy Njeuma had to deal with the wranglings of this union until 2012 when Nalova stepped in. Five years after its ban, students are in the process to revive their students union in the University of Buea. Nalova is gone and the newly appointed Prof. Ngomo Horace Manga who takes over would have the prerogative of allowing UBSU revived on the Campus of the University of Buea.

However, the group took to Facebook last week to announce that it would be reinvigorated on campus as seen by their post below.

Let’s wait to see how it unfolds. 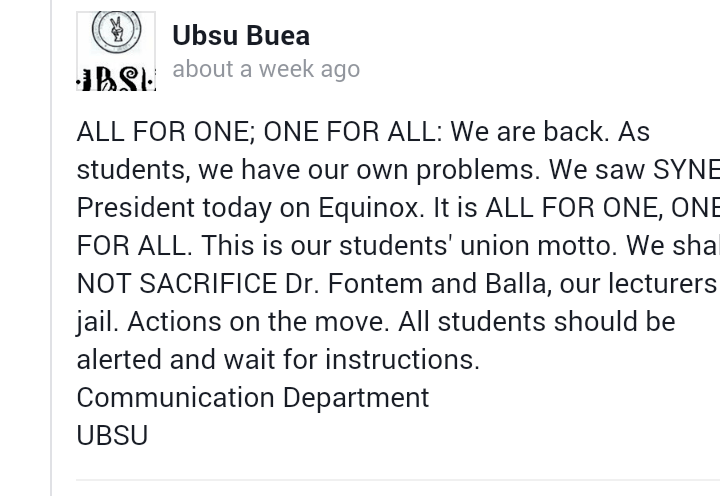