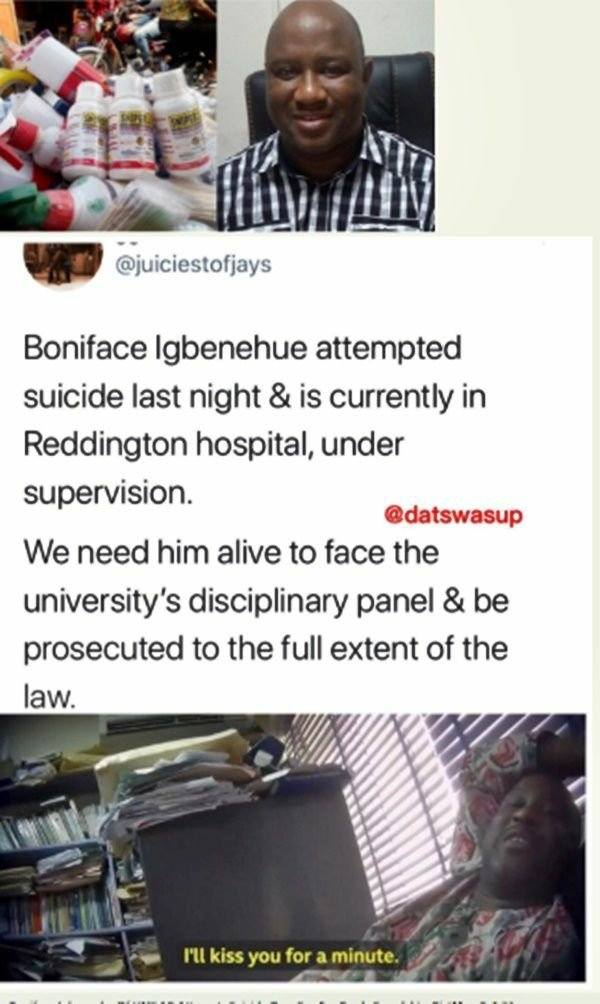 The pastor has been disowned by his Foursquare Gospel Church following the reports few hours after the video was released.

He was found foaming after allegedly drinking rat poison to ostensibly commit suicide.

A statement issued by the church on Monday said:

“The attention of the leadership of The Foursquare Gospel Church in Nigeria has been drawn to a video clip trending on social media platforms titled ‘Sex for grades: Undercover in West Africa Universities – BBC News wherein a lecturer in University of Lagos named Dr Boniface Igbeneghu, also described as a pastor in Foursquare Gospel Church, was allegedly involved in sexual misconduct with some female students of the university.

The general public is hereby informed that as a holiness and Bible-believing church, we do not condone such heinous and unscriptural act among our ministers.

We totally dissociate ourselves from the purported conduct of Dr Igbeneghu and promise to take appropriate measure as soon as the ongoing investigation is concluded.” PeaceFM Online published

Meanwhile, he has been asked to step down from all ministerial assignments as announced by the church in the same communique signed by its National Secretary, Rev. Ikechukwu Ugbaja.

Since the publication of the work by journalist Kiki Mordi and her team, there has been serious trolling on social media on the issue of sexual harassments in school.