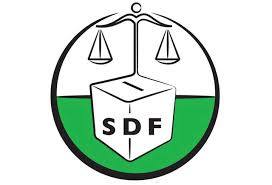 Some members of Cameroon’s opposition party, SDF have revealed anonymous threats to their lives after their recent appearance at parliament on matters of the Anglophone struggle in Cameroon.

The threats they say can not be traced but they are ready to go on with their work as representatives of the people.

In an audio obtained by ARREYB News Reports (also reported by Equinoxe radio), one of the MPs expressed a dire need to stand for the people despite the threats.

“We are telling Cameroonians what is happening in our country and we should not be afraid of that. Even if they kill us, who ever is threatening us would not kill the situation at hand.

That can not stop us from Pursuing the right course. Threats or no threats, we opted to be parliamentarians and we would continue our work”

However, after the just ended parliamentary session which was constantly interrupted by SDF MP’s display, much has taken place and the government is faced with a heavy task.

In a press conference organized in Yaounde on November 14, 2017, SDF MPs  revealed that their boycott shall be extended if measures are not taken to adequately tackle the present situation.

“Our move is aimed at dragging the attention of the Head of Sate so he should adequately respond to problems faced by people living in the North West and South West regions of Cameroon”, an MP commented.

According to some political analyst, by so doing the SDF party is indirectly heeding to calls and pressure exercise by the people of their various communities calling on them to resign as Members of parliament of the State of Cameroon.

Hey we’ve got thousands who read and trust us daily, you too should . ARREYB is noted for intriguing content with well verified and accurate facts !!!