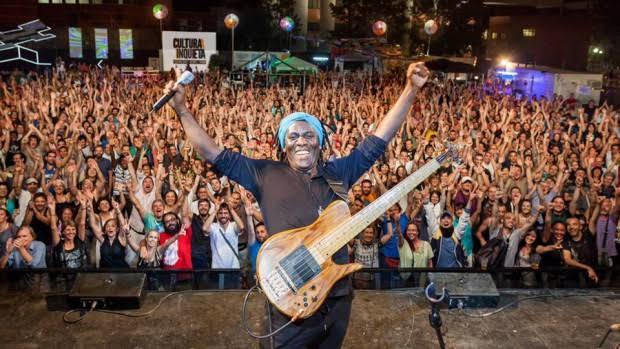 Bona Pinder Yayumayalolo was born in Minta, Cameroon where he grew up until 22 then relocated to France to further his music studies. Bona has been recognized as one of the planet’s five revelations of the past decade.

Ninja as he nicknamed himself, the the Grammy Award-winning jazz bassist has never stopped to poke into political issues and the handling of the Anglophone crisis in Cameroon by the Biya regime.

In January 2017, Bona shared a message he directed to Paul Biya calling him out to provide a solution to the crisis faced by the Anglophone regions of Cameroon.

In his letter, Bona deplored the current management strategy and power struggle between the government and the English-speaking opinion leaders (teachers and lawyers who led the strike at the time).

“With no real strategist at your side, I fear that you will make the wrong choice, by going for the BIR”, Bona said in his post addressed to Biya.

The singer advised the Head of State to visit the English-speaking regions himself.

“So go there yourself, go embrace Bamenda, Buea, Limbe and fix it…”.

In his usual style of mixing French and English, it is evident that Richard Bona saw far. He has since then been vocal on the crisis that has caused more than 2,000 deaths and half a million people displaced.

In an interview recorded in Paris, Richard Bona declared that he would only set foot again in Cameroon in 2035. 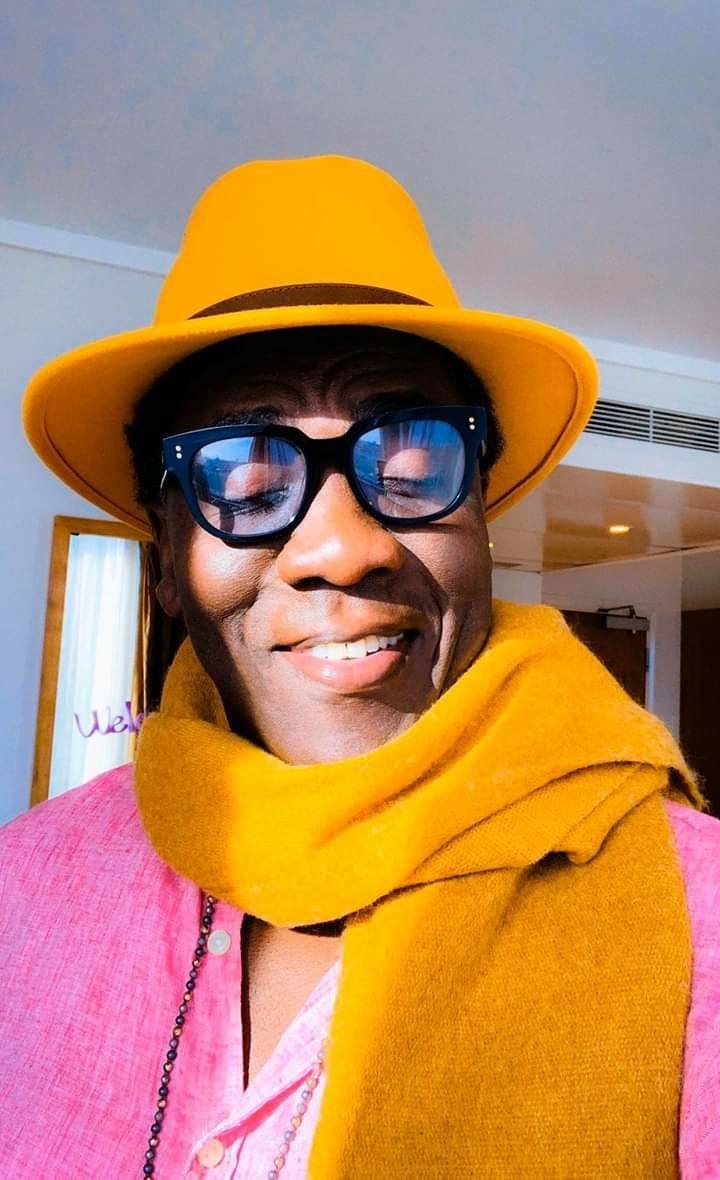 When questioned by the journalist about a message to Cameroonians who are waiting for his return to motherland, Richy said “ tell them I will be back in 2035, when development would have come into effect.”

But those who know the ironic nature of the famous bassist could easily detect that his declarations are usually veiled taunts. Indeed, Richard Bona swore not to return to Cameroon.

In a searing post on his Facebook page in October 2014, he rose up against the Cameroonian law to ban dual nationality.

This means he had to apply for a visa to enter his country of origin, Cameroon. Bona is rebelling against the “harassment” he has to go through to visit Minta (Central region), village of his roots.

“I will not set foot there as long as they require me to have a visa”, he wrote.

Bona even refused to come and collect his medal when he was awarded the rank of an ‘Officer of Order and Valour’ by the State of Cameroon for his artistic work which has allowed him fly the national flag across the planet.

One of Bona’s most outright expression of disapproval for Biya and his regime was when he refused to perform as expected before several guests and other African leaders in Japan – on the occasion of an Africa Development Conference in Yokohama which opened on August 28, 2019.

Richard Bona on tour in Japan was invited by Japanese Prime Minister Abe Shinzo to sing in front of guests and other African heads of state.

When informed that Paul Biya confirmed his presence, Richard Bona declined his participation in the event.

The famous bassist said his image would no longer be associated with a country where babies are killed.

During the 2018 presidential elections, Bona even addressed lead opposition presidential candidates, asking them to form a unified front for peace and free the people from agony. 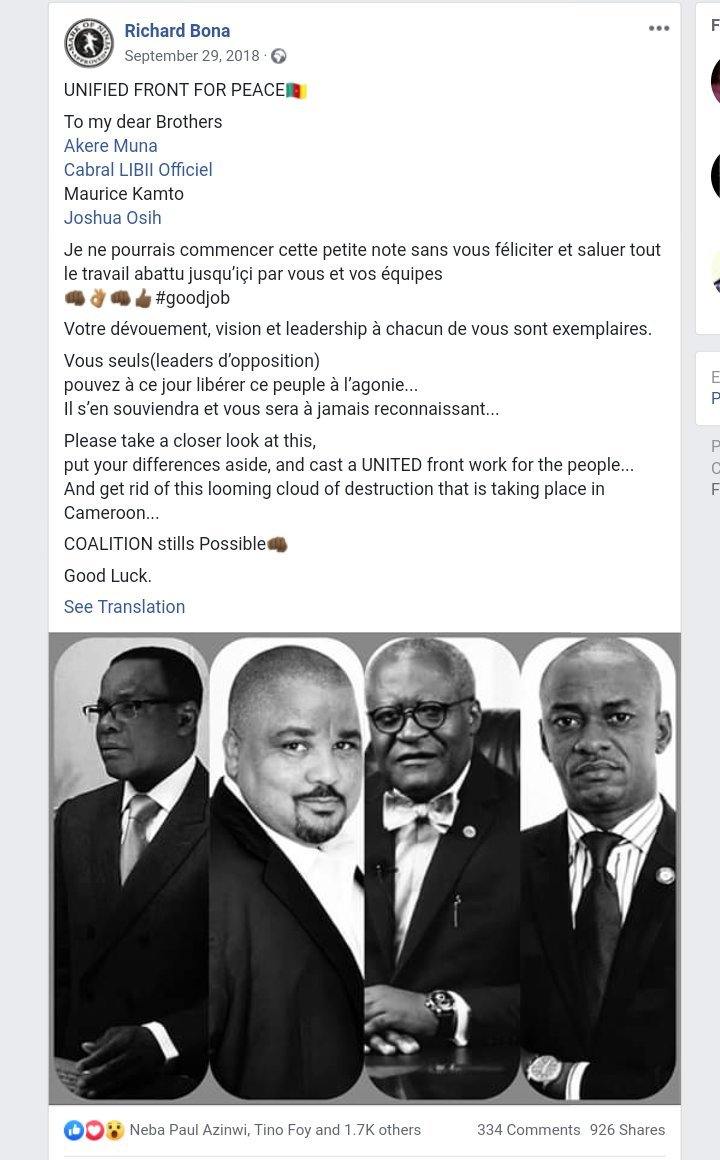 It is clear that till date, relations between the Jazz bassist and the Yaounde regime is only deteriorating

Bona emigrated to Germany at the age of 22 to study music in Düsseldorf, soon relocating to France, where he furthered his studies in music.

While in France, he regularly played in various jazz clubs, sometimes with players such as Manu Dibango, Salif Keita, Jacques Higelin and Didier Lockwood. 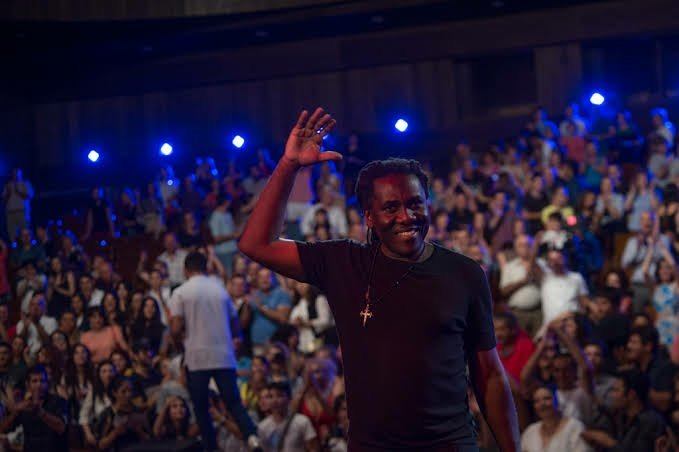 In 1998, Bona was the Musical Director on Harry Belafonte’s European Tour.

His debut solo album, Scenes from My Life, was released in 1999. He has also been prominently featured in Jaco Pastorius Big Band albums, as well as many other albums by various top-tier jazz musicians.

In 2002 Bona went on a world tour with the Pat Metheny Group. The release of the successful Speaking of Now album that year had marked a profound change in the group’s direction by adding younger musicians to the band, notably with Bona as bassist, vocalist, guitarist and percussionist, along with drummer Antonio Sánchez and trumpet player Cuong Vu.

In 2005 Bona released his fourth solo album Tiki, which included a collaboration with John Legend on one track, entitled “Please Don’t Stop.” The album was nominated for Best Contemporary World Music Album at the 49th Grammy Awards.

He held a professorship of jazz music at New York University.

In 2015, with restaurateur Laurent D’antonio, he opened Club Bonafide.

Richard Bona’s music took on a distinctive Afro-Cuban flavor with the 2016 release of the Heritage album with Cuban band Mandekan Cubano. The album was released under Quincy Jones’ Qwest label