On 10 September, President Paul Biya delivered a rare address to the nation in which he spoke of the Anglophone Crisis facing Cameroon.

Beginning in 2016, the situation in the country’s two English-speaking regions quickly spiralled from protests by teachers and lawyers into bloody war that has claimed more than 2,000 lives.

To solve this crisis, Biya outlined a new “major national dialogue” to be spearheaded by Prime Minister Dion Ngute, an Anglophone from the Southwest.

These talks, he said, would be inclusive and aimed at addressing not just the Anglophone Crisis but “issues of national interest such as national unity, national integration and living together”

As dialogue talks opened today in Yaoundé, there is a dominance of feelings that the new initiative may appear to be repeating the mistakes of the past – the same dynamics that led to the crisis in the first place.

Among other keynote speakers, Sultan Ibrahim Mbombo Njoya of Bamoun made headlines for unleashing bomb shells in his brief talk which addressed crucial issues relating to the long standing regime of President Paul Biya . 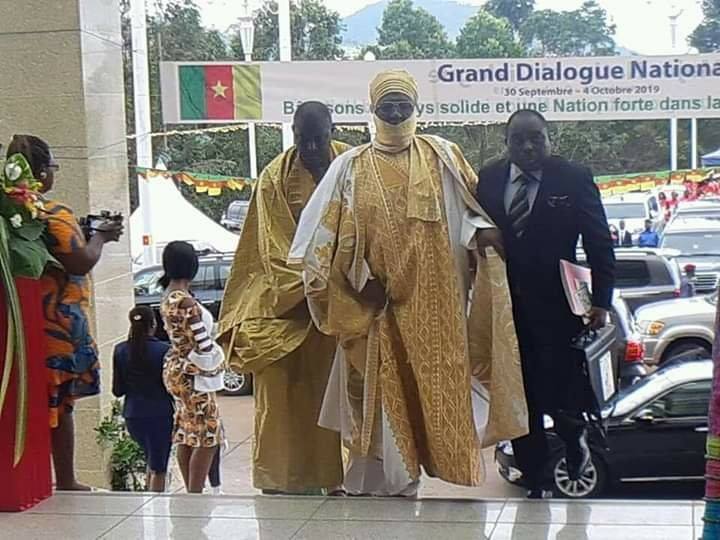 The Sultan suggested that the constitution be changed, presidential mandate dropped to 2 to 5 years with a two-round voting at presidential elections.

He also requested the revision of the electoral code and said there should be a presidential clemency to all political prisoners.

As posted by Bar Akere Muna, prominent Cameroonian lawyer and presidential Candidate in the 2018 elections, the PM’s response to the Sultan was a reminder to stick to the agenda and not go “out of topic”, an action which will only help to intimidate further talks and the fate of the dialogue which can already be predicted. 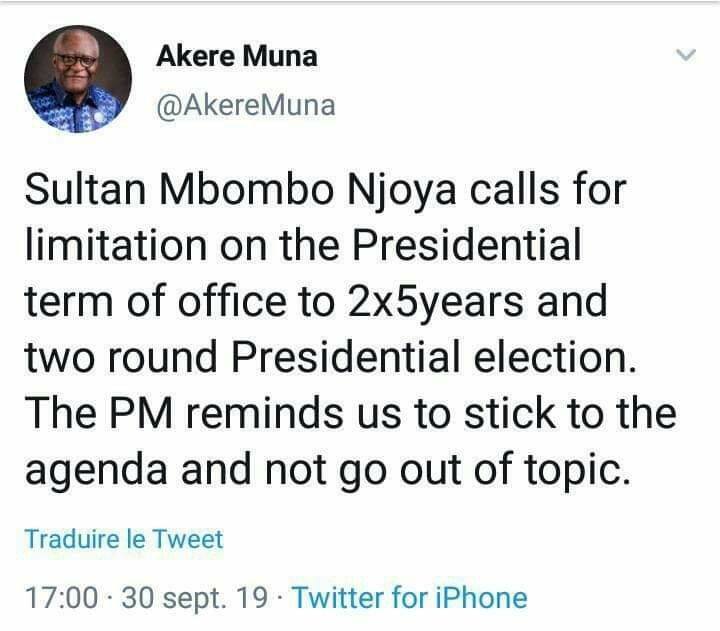 Note that secessionist leaders turned down an invitation to attend for fear of being arrested. Nothing has been done legally to assure their liberty while in Cameroon, hence the invitation to them is a trap. The only legal assurance should have been the declaration of amnesty which was never done.

The leaders of the Ambazonian independence movement have said they are willing to travel to Switzerland and the US but not Cameroon or its neighbouring countries. They have made it clear that they would not partake in the “national dialogue”.

Meanwhile, after a press briefing and today’s coverage of the national dialogue, journalists have complained that the session has caged the freedom to report, conduct interviews or talk to conference delegates.

On instructions from Dr. George Ewane, spokesman of the national dialogue to the press, the press was denied access to the plenary session and work at the level of commissions.

Journalists were asked to remain at the press centre, no interviews with delegates without due authorization from the communication unit .

A disgruntled journalist said “no journalist was allowed to interview any delegate without the express permission of Dr. George Ewane, not even loitering around – Journalists are caged in the press room”.

Accredited journalists have condemned the instructions indicating that its a slap on the face of press freedom.

Note that in a five page document released on September 18, the Cameroon Renaissance Movement Party (CRM) under Maurice Kamto declared it will not be part of the dialogue talks led by Prime Minister , Joseph Dion Ngute, until some conditions were met including consultative talks, open debates with all stake leaders under full media coverage.