If Going To America Seemed Your Only Hope, Then Trump Has Bad News For You- “The American DV Lottery Would Be Terminated” - ARREYB

If Going To America Seemed Your Only Hope, Then Trump Has Bad News For You- “The American DV Lottery Would Be Terminated” 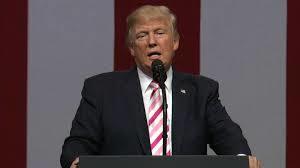 America’s President Donald Trump has announced that he will ask the Congress to terminate the “diversity lottery” program.
Trump thinks it was through this Visa program that the New York City terrorist entered the U.S.

“Diversity lottery. It sounds nice. It’s not nice,” the president said to reporters at the White House.

Watch the full video below:

This also comes few hours after Trump spoke ill of Sen. Chuck Schumer (one who spearheaded the lottery) in a Twitter post yesterday.

However, this brings a dilemma to some Africans who have recently submitted their entry into this program hoping for the “American green fields”.

This might just be another bad luck to those who had seen America as their only option to success.

We can only anticipate Trump’s next actions. Worthy of note is the fact that the no-nonsense Trump has been so unprecedented in his rulings.

Trump has never ceased to amaze the world with his policies since he came to power.